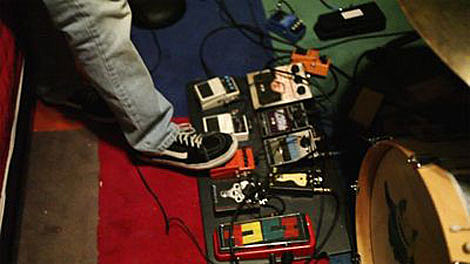 Ari Marcopoulos's photographs and videos capture the rhythm and feel of diverse youth-oriented subcultures from snowboarding to underground music. His honest portraits depict, as he has stated, "something that just stands for life lived." This evening, he brings together musicians from the electroacoustic improvisation scene, including Orphan and Yellow Tears, for a night of performance and noise. [Whitney]

Participants in the "performance and noise" described above will also include Sonic Youth's Thurston Moore and Kim Gordon. It'll happen at the museum at 7:30pm on Friday, March 26th during the museum's pay-what-you-wish Fridays (6-9pm). That's less than a week before Thurston, drummer Ryan Sawyer and Daniel Carter play Rose Live Music.

In other SY news, the Thurston-led hardcore band re-forming for SXSW, Society's Ills, has changed is name to Demolished Thoughts (the lineup is still Thurston Moore: Vocals, J Mascis: Guitar, Don Fleming: Guitar, Andrew W.K.: Bass, Awesome Allison: Drums). They're playing at the Ecstatic Showcase on Friday, night (3/19) and a Mog day party on Saturday at the Mohawk (with the Black Keys). For their set, they'll expand on their 7 Seconds repertoire with a mix of hardcore selections from scenes that include Boston, Detroit, LA, DC and NYC.

Back in NYC, Lee Ranaldo, photographer/artist spouse Leah Singer and their two sons will be performing at IVANAHelsinki & Love Contemporary pop-up store (238 Mulberry St btwn Spring + Prince) on Sunday, March 14th. The event, titled "What Is That Little Black Thing I See There In The White?" features Lee Ranaldo/Leah Singer/Sage Ranaldo/Frey Ranaldo doing "Music/Movies/Candy/Paper Cutting." It's all ages and runs from 4-6:30pm.

Videos of some recent Lee Ranaldo sound performances are below...

A Random Collection of Scenes from a Performance by Lee Ranaldo at Hogar Collection Feb. 21, 2010