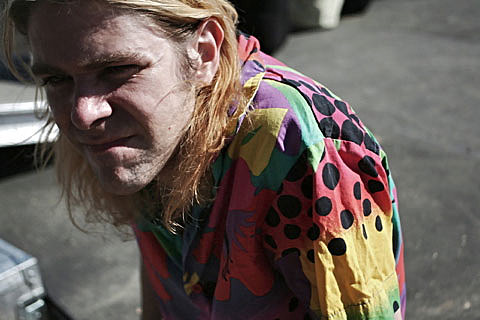 Following a stint of dates with The Flaming Lips (none of which hit NY, or contain all of The Soft Bulletin) Ariel Pink's Haunted Graffiti will hit the road with the Brazilian Tropicalia greats Os Mutantes to play a string of shows including Fun Fun Fun Fest in Austin and Webster Hall on Nov 13th. Webster Hall ticket info is forthcoming.

Though previously believed and later postulated, Ariel Pink WASN'T a member of the "LA Supergroup" who played a show at a greater Police State, er, Los Angeles art gallery over the weekend....

With an art exhibit dedicated to the darker forces of Los Angeles, Esteban Schimpf may have gotten what he asked for inviting a mystery band called Highons to play his closing reception.

The secret Schimpf set up was that Ariel Pink would be one of the masked members irking out strange noises in the corner of Carmichael Gallery. But either Pink grew a few inches since FYF Fest, or the guy wearing a silver space suit was somebody else, an impostor. And they would have gotten away with it, had an intrepid reporter not gotten involved...

...When asked [after the show], the silver spaceman refused to remove his mask and disappeared. A girl walked by and whispered, "Hey, that was my roommate and his friends. That was not Ariel Pink." Doo doo hit the fan.

Yesterday, Schimpf said he was still "in the dark" about the Ariel Pink mystery. "But I don't care," he said. "It was a great show and everyone liked it and had a good time."
-[full story at theLA Times]

All tour dates and some recent Ariel Pink video is below...

Os Mutantes recorded in a Festival in 1968 in São Paulo, Brazil