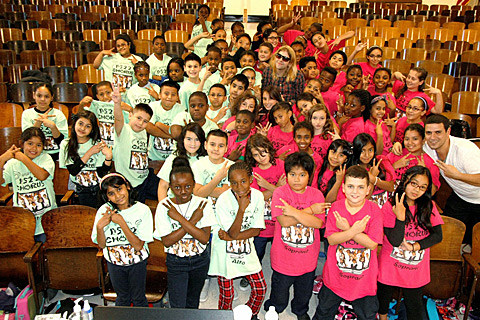 You may remember that Staten Island's famed PS 22 Chorus covered Ariel Pink's song "Round and Round" a few years ago. On a recent trip to NYC to promote his forthcoming album, pom pom, Pink visited the PS 22 Chorus who had worked up some special renditions of a couple of the album's tracks: the lighthearted "Jell-o" (which makes a lot more sense when sung by kids) and the more grim "Picture Me Gone," covering a few blips on the massive spectrum that Pink's music occupies. Check the videos out below.

The chorus members also had the opportunity to ask Pink questions. As a former art teacher, Pink's rapport with the kids was endearing, explaining his writing process, the meanings behind the songs and more. One member even went on to say, "When you're dead, I think that they should call you a legend."

Pink's upcoming tour stops in NYC at Terminal 5 on February 25. Tickets for that show (a much bigger venue than Pink's played here) are still available.

Jack Name, who is touring with Thee Oh Sees even sooner, was added as opener to the Terminal 5 show.

Check out the new videos from PS22, as well as their 2011 cover of "Round And Round," as well as well as Pink's full tour schedule, below...

PS 22 Chorus - Round and Round