DOWNLOAD: Ariel Pink's Haunted Graffiti - Round and Round (MP3) 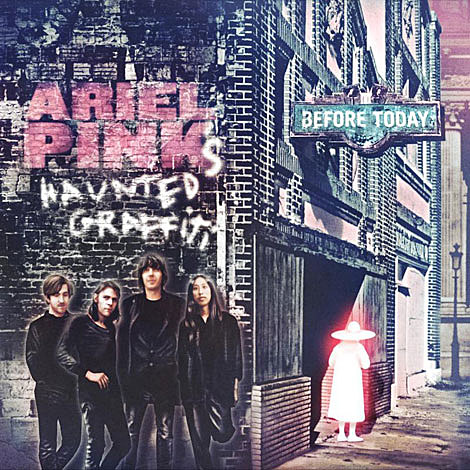 With "Round and Round," the track above, you get just over 5 minutes of taut, hazy disco-flavored pop from the forthcoming disc by Ariel Pink's Haunted Graffiti. The record, Before Today, is due to come out June 8th on 4AD.

Six months in the making, Before Today was recorded in part in Encino at the House of Blues (once Tito Jackson's home studio) with Sunny Levine (Quincy Jones' grandson) and Rik Pekkonen (Bill Withers, Seals & Crofts, Bread) as well as at the band's home studios...The outfit, now consisting reclusive pop surrealist Ariel Pink (vocals) alongside Tim Koh (bass/vocals), Kenny Gilmore (guitar/vocals) and Aaron Sperske (drums/vocals) will tour Europe this summer (details to follow) and have confirmed a headlining show at New York City's Mercury Lounge on May 4th. [4AD]

The record is his first on 4AD, and that's the album art above. The label plans to release "Round And Round" with b-side "Mistaken Wedding" as a limited edition 7" and digital download single on April 26th.

Some old Ariel Pink videos are below...

Ariel Pink "Are you going to look after my boys?"