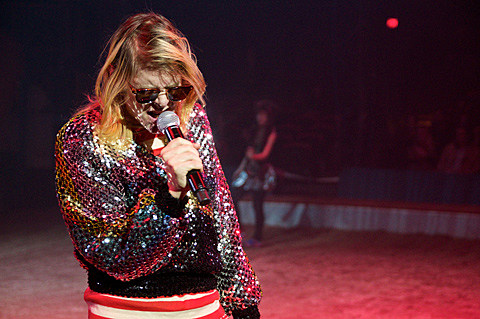 In an interview with SPIN, Ariel Pink revealed plans to release a new Haunted Graffiti record this August via 4AD and tour this September in support of it with James Ferraro. That tour hasn't been announced in full yet but a few dates are beginning to surface including a NYC show on September 14 at Webster Hall with TEEN. Tickets for that show go on sale Friday (6/8) at noon with an AmEx presale starting Wednesday (6/6) at noon.

"There are definitely not any links to my lo-fi origins. It's so diverse but so different from anything I've done before. In a sense, its really the record I wanted to make back when I made Before Today, but couldn't due to pressures and different factors. We had time to let our hair down and try new things."

And in regards to the album's percussion:

Since I write a lot of the stuff in my head, its very difficult to have a drummer translate those ideas," Pink explains. "But [my mouth percussion] became a guide for Cole to beat match with real drum sounds. Essentially, it's me playing drums on the whole record, but not with my hands: by matching my mouth drums to live percussion, you can't tell the difference between me and a live drummer."

A list of all currently known dates and the video for "Bright Lit Blue Skies" off 2010's Before Today LP below...