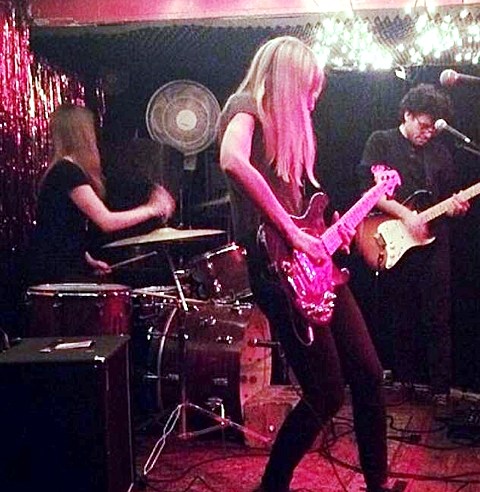 Brooklyn lo-fi punk trio Arm Candy recently put out their debut album, The Right to Bear Arm Candy, with six original tracks plus a cover of "What Kind of Monster Are You" by all-female '90s Dischord trio Slant 6. If you're a fan of the band they chose to cover, you might dig this too, and you can check it out by streaming it below. It's also downloadable (name your price) at bandcamp.

Arm Candy have been playing a good deal of local shows lately (maybe you caught them with Priests and Noun or with SVPER and Palehound), and they'll continue to do so. Three of those shows are this weekend, including the previously discussed Death by Audio (4/18) stop of the Priests / Good Throb tour, which also includes Brooklyn's Household.

Then on Saturday (4/19) they play the free WBAR-B-Q at Barnard College with Inc. Ka, LVL UP and more. Later that night they'll play a midnight show at Silent Barn with Syracuse noise punks Perfect Pussy and multiple DJs. More info on Facebook.

They also play another show on May 29 at Shea Stadium with local pop punks Chumped, Priests' pals Downtown Boys (following their tour with EMA which hits NYC twice), and Canadian punks TV Freaks.

Stream The Right to Bear Arm Candy below...

Arm Candy - "What Kind of Monster Are You" (Slant 6 cover)