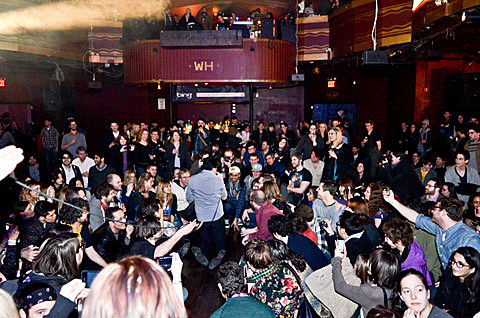 In glorious celebration of the imminent release of Art Brut's 'Brilliant! Tragic!', a rag tag group of comic book magicians have come together for an exclusive project. Each one of the shining ten album tracks has been given to ten artists to interpret as they see fit. The result? Comic book masterwork. Plus, no comic would be complete without a letters' page. Fancy submitting a question to me, your editor in chief, Barnaby Fudge? It can be a letter about anything Art Brut related. I will answer your every whim and desire. Get it in either through Chez Argos or direct to source at delightfullyfudge@gmail.com. You can find the complete list of artists here, including Bryan Lee O'Malley, Hope Larson, Jamie McKelvie and Jeffrey Lewis. Going to print soon, for all you geeks out there, this is a pretty exciting one.

Don't forget to get your letters into me. Forcible or otherwise.

The comic book isn't out yet, but the source material, Art Brut 's new LP Brilliant! Tragic! was released back on May 24th, and the band will hit the road in support later this month. As discussed, one of their upcoming dates is June 23rd at Music Hall of Williamsburg (tickets are still on sale). They've also added Maxwell's on June 21. Tickets are on sale now for that too. Reptar opens both shows.

The Black Francis-produced LP is available now and can currently be purchased on Amazon in CD format for 25 cents less than the MP3 download. Check out the song "Lost Weekend" from the album downloadable above and in video form, along with updated dates (and some European Jeff Lewis dates too), below...