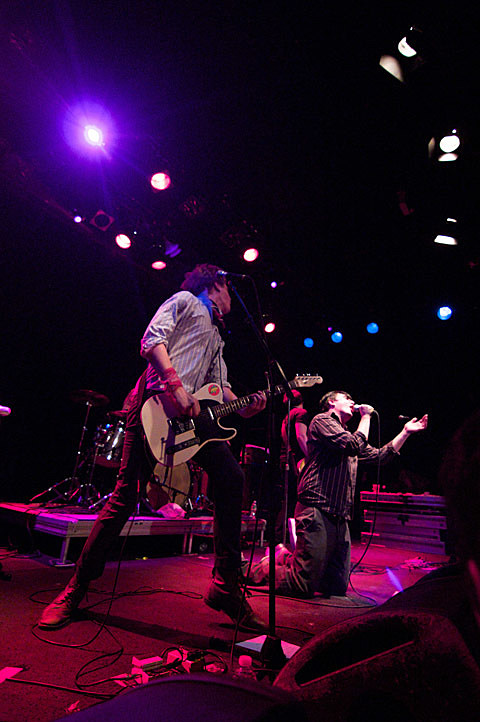 Anyone who has listened to Art Brut knows that frontman Eddie Argos isn't just a musician, he's also a fan. A fan of comics, movies, television, milkshakes...and music. Eddie and the rest of the band laid low for most of 2012, after a busy 2011 with their most recent album, 'Brilliant! Tragic!' and subsequent touring. But we wanted to know what Eddie was listening to and his list is definitely NOT full of the usual suspects. Says Eddie:

I've been trying to think if I liked 10 albums this year. I think I did. Which is rare for me. However I can't be bothered to fact check and I have a shocking memory so some of my choices may be from the end of last year. So in no paticular order and written in real time with no forethought here is my hopefully top ten albums of the year...

1. No Love Lost by The Nightingales.
Although I've said no paticular order if pushed I would say this is my favourite album of the year. I love all their albums but this is definitely their best. I've spent everyday since it was released listening to it at least once. It depresses me how few people know about this band. Robert Llyod needs to be recognised as one Britain's greatest ever poets and the band celebrated the world over.I wont be satisified till The Nightingales get invited to play the Rock and Roll hall of fame and storm it in a big drunken dangerous spectacular mess or fall on their faces in the attempt.

2. Wildlife by The Lovely Eggs.
Helen Love (who had she found the time to release an album this year would definitely be in my top ten list) described The Lovely Eggs as 'fearless genius the best band in the world right now' can#t get higher praise than that. Go and buy their album (and some Helen Love while you are at it)

3. The Plot Against Common Sense by Future Of The Left.
Righteous anger deliverd with razor sharp wit and it rocks the fuck out.Perfect.

4. Tempest by Bob Dylan.
Bob Dylan is one of those artists who just keeps getting better. Each album better than the last. This is his 35th Studio album.He is at his peak. Hooray.

5. On The Hot Dog Streets by Go Kart Mozart.
I love everything that Lawrence from Felt/Denim/Go Kart Mozart has ever done. Perhpas a bit too much as I already owned most of this as the unreleased Denim album 'Denim Take Over'. which I bought from ebay for a lot of money. Still thats my fault really and bitterness aside this is a great album.

6. Celebration Rock by Japandroids
7.Hypnotic Nights by Jeff The Brotherhood.
I am aware that a few of my choices are a little esoteric.However Im totally amazed that these albums aren't in all the other end of year lists. They are fucking brilliant. Ive been rocking out and getting drunk to them all year.

8. Average Kinda Savage by Thee Orphans
Hand on heart I think this is one of the best fucking Glam records ever made. A bit odd that it came out in 2012 and not the early seventies but still all the better for it.

9. and 10.
Im cheating a bit now to fill up the quota but a band called The North Sea Scrolls comprised of Luke Haines formerly of The Auters and Cathal Coughlan from Fatima Masions have just released a double concept album that details an alterante occult version of the history of the British Isles which I haven't heard yet but Im dairly sure Im going to love and also the band The Indelicates have started releasing their new album ' Diseases Of England' in three parts and I loved the first part. So know I at least like one third of the album.
-