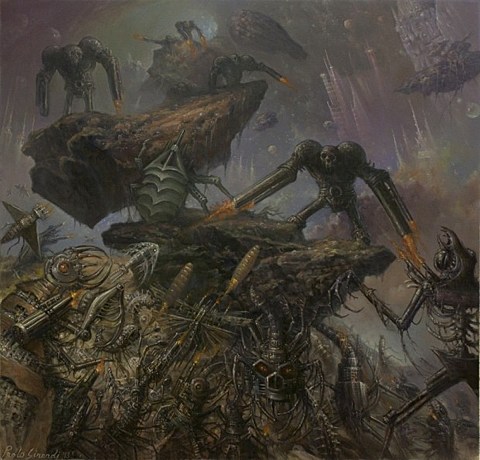 Labyrinth Constellation, the debut full-length by zany Long Island death metal troupe Artificial Brain, has been a long time coming. They've been around since 2009, but their other commitments -- notably, guitarist Dan Gargiulo's duties in Revocation -- have kept the band in the demo stages and away from the live circuit for almost that entire period. But the album is finally coming out on February 18 via Profound Lore, and it's well worth the wait -- 2014 is young, but I don't anticipate hearing many death metal albums that top this one before it's over.

Artificial Brain's absurdly guttural vocals and cosmic imagery (their Metal Archives page describes their lyrical themes as "space") will automatically draw comparisons to Wormed and Demilich, but this band's counterintuitive high point is their sense of melody. Like Gorguts, whose 2013 album pretty much co-ruled the year in death metal with Carcass's new one, Artificial Brain like to string eerie-but-pretty chord progressions along complicated arpeggiated patterns; Gargiulo and fellow guitarist Jon Locastro's thrashy bent remind me a little of Chicago's underrated The Chasm too. The songs have enough going on that they take a few listens to really process, but it's not a torrent of unrelated parts -- each tune is carefully constructed and periodically catchy.

MetalSucks debuted a song from the album a few weeks back; you can stream it below. A second track debuted on Pitchfork today. Live appearances are still rare for this band, but they'll be playing an Invisible Oranges/Signature Riff co-presented show with Chicago's equally weird (and also great) Aevangelist, along with Maryland's Oak and Castevet/Kayo Dot side project Disparish at Saint Vitus on 1/25. Tickets are available. (Don't forget that Aevangelist are on tour, starting tonight (1/17).)