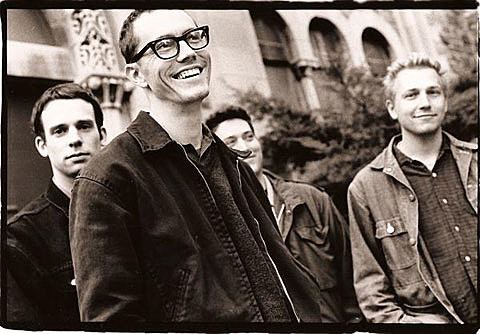 The Sea & Cake will support Broken Social Scene on their upcoming trek that will see them at Rumsey Playfield in Central Park on 9/18 (tickets). The tour pairing makes perfect sense considering Sam Prekop's (The Sea & Cake) contributions on the recent BSS record, and his new LP Old Punch Card due on 9/7 via Thrill Jockey. A recent press release also states that there is a "rumored to be a split 7" between the two bands in the works". Hmm, rumors in a press release? Look for more details on that 7" soon.

In other BSS news, the band is releasing a series of remixes for their song "All To All". So far contributions from Sebastian Grainger, DJ Mom Jeans, Jojoflores, and Skeet Skeet have emerged, with more due every week. Download one contribution above, and the rest at the remix site. The video for "All To All" (the original) is viewable below.

NYC is looking like Arts & Crafts showcasing ground for the next few days, as TONIGHT (9/1) the previously discussed The Wooden Birds / Dan Mangan tour will hit The Rock Shop (the shows was moved from Union Hall), tagging Mercury Lounge two days later (tickets).

Chikita Violenta is prepping to release their forthcoming LP for A&C, TRE3S, due in early 2011. The album was recorded in Canada with former Broken Social Scene producer Dave Newfeld. An MP3 is being given away at their site.

Last but not least, Chilly Gonzales (who will be in NYC soon with Peaches) is busy helping Feist with her new album. Feist and Gonzales both appear on Jamie Lidell's new album. Chilly's new album, Ivory Tower, is out September 14th.

The Sea and Cake - "Weekend"