Lambesis (center) with As I Lay Dying 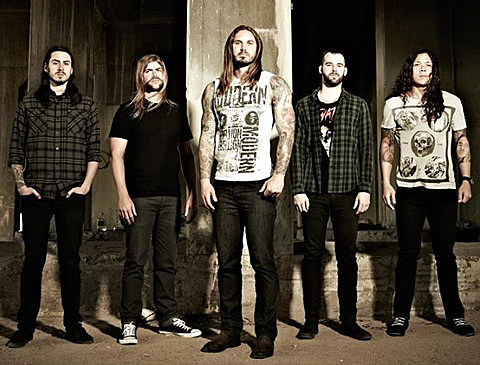 Christian metalcore band As I Lay Dying's vocalist Tim Lambesis was recently sentenced to six years in prison after he plead guilty to attempting to hire a hitman to kill his wife (the hitman was a San Diego police officer), and things aren't going to be looking up for Lambesis any time soon. In an interview with Alternative Press leading up to his incarceration, Lambesis said that he was actually an atheist. (At least one religious site has explained to its readers that Lambesis didn't try to kill his wife because he's an atheist.) He even went further and said two of his bandmates were atheists before him, and threw untold number of bands under the bus when he said "maybe one in 10 Christian bands we toured with were actually Christian bands." Here's a bit from the interview:

We toured with more "Christian bands" who actually aren't Christians than bands that are. In 12 years of touring with As I Lay Dying, I would say maybe one in 10 Christian bands we toured with were actually Christian bands. I actually wasn't the first guy in As I Lay Dying to stop being a Christian. In fact, I think I was the third. The two who remained kind of stopped talking about it, and then I'm pretty sure they dropped it, too. We talked about whether to keep taking money from the "Christian market." We had this bizarrely "noble" thing, like, "Well, we're not passing along any bad ideas. We're just singing about real life stuff. Those kids need to hear about real life, because they live in a bubble."

There are lots of other interesting reveals in the interview, including Lambesis talking about cheating on his wife and his admissions about using steroids and his opinions on "roid rage" (doesn't believe in it, like God). Head over to the Alternative Press to check it out.

Meanwhile, check out a medley from one confirmed fake Christian band below...