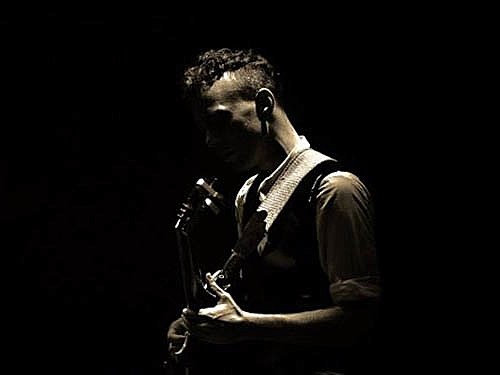 One part of Asaf Avidan, the Israeli songwriter who gave a solo concert on Friday night at Irving Plaza, is a lot like Leonard Cohen: the Leonard Cohen who sings delicately fingerpicked songs full of finely calibrated metaphors, aphoristic phrases, paradoxes and mournful romance. "I said, Baby you are magic/ She said, No, hon, just a trick," he sang in "Anchor."

But his vocal range is octaves above Mr. Cohen's bass, in the androgynous zone of altos and countertenors. And he's far from Mr. Cohen's reserve. As his voice climbs he gives it a ragged, bluesy edge, yowling or wailing, even shrieking at the right moment, to infuse his songs with riveting drama. In that he's like Robert Plant, the Led Zeppelin singer who exults in the acrobatic extremes of the blues. Mr. Avidan even has a hard-strumming blues, "Hangwoman," that could be a sequel to Led Zeppelin's "Gallows Pole." [Jon Pareles for NY Times]

The last two times Israeli singer Asaf Avidan played NYC were at Irving Plaza (in February of 2014 and 2015), but his next trip here will have him playing his most intimate NYC shows in a while. He' doing four nights at Rough Trade on April 10, 11, 13 and 24. Tickets for those shows go on sale Friday (1/8) at noon. No other dates announced at the moment.

The NY Times review quoted above is from his 2014 Irving Plaza show. The first sentence compares him to Leonard Cohen, and that's the first thing we heard when listening to his latest album Gold Shadow too (though a much higher-pitched Leonard Cohen). "The Labyrinth Song" especially sounds like him. On the other hand though, NPR's Bob Boilen also compared him to Janis Joplin and Nina Simone, so he's certainly not just aping any one person. If you haven't heard the album, you can listen via Spotify below, where you can also check out the video of the Tiny Desk concert he recorded for NPR.