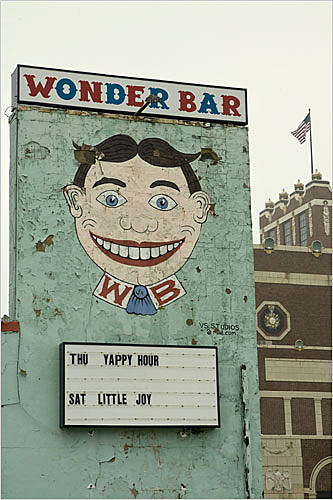 Yes, it is something of a bummer.

Three or four decades of stops and starts -- mostly stops -- in this legendarily faded and ill-starred stretch of the Jersey Shore and finally, finally, things seem to reach a critical mass. Revived music halls of all shapes and sizes. Cool bars, a Mexican taqueria, a surfer shop, glass blowers and a potter on the Boardwalk. The renovated Convention Hall and Paramount Theater with its "Greetings From Asbury Park" sign out front. And the famous Thursday evening "doggy yappy hour" for pets at the Wonder Bar...

...Lance Larson, a veteran musician who helps run the Wonder Bar, figures that Asbury Park has a heritage of music, art and eccentricity that will attract people, tough times or no.

"We have one thing that no one else does, and that's entertainment," he said, picking at a cheeseburger on Thursday afternoon. "It's not just because of Bruce [Springsteen]. It's always been that way. I've toured every place, and there's no place like playing here. It's like Parris Island, the boot camp of music. If you can play here, you can play anywhere." [NY Times]

The recently re-opened Wonder Bar is suddenly on everyone's radar...

"It feels really great, it's exciting," said manager Debbie DeLisa of Deal. "There's a lot going on down here right now, with (concert promoter) Live Nation coming in to do the shows at Convention Hall. They're going to do some shows here also."

DeLisa's upbeat, optimistic tone is a far cry from last year, when the Ocean Avenue club was set to close to make way for a redevelopment project by developers Asbury Partners, which had purchased the property.

The venue was spared when developers Madison Marquette came into town and took over some of Asbury Partners' holdings, including the Wonder Bar.

DeLisa said the club is now waiting for approval from the city to construct a large outdoor deck facing the nearby Stone Pony; other plans include building a Tiki bar and adding a volleyball court to the facilities. [Metromix]

Live Nation has started booking the shows there, and I suppose that's why so many familiar names are suddenly playing in Asbury Park. Wonder Bar recently had Mates of State and Little Joy (see above). Upcoming shows include HR from Bad Brains (tonight), Rasputina, We are Scientists, and The Duke Spirit. Tickets can be found at Ticketmaster.

Watch a short documentary on Asbury Park's Palace Amusements below...