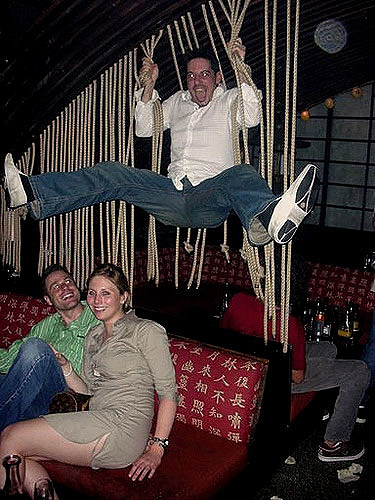 Last time we spoke about something like this, it was Black Betty in Brooklyn under fire from the peeps at ASCAP who believe that bars should not "perform copyrighted music without permission". By "perform" I assume they mean the music coming out of the speakers thanks to a jukebox, DJ, CD player, or even cover band? As Idolator reported today,

The American Society of Composers, Authors and Publishers (ASCAP) today announced that it has filed 26 separate infringement actions against nightclubs, bars and restaurants in 17 states.

In each of the cases filed today, the business establishment has publicly performed the copyrighted musical works of ASCAP's songwriter, composer and music publisher members without obtaining a license from ASCAP to do so. ASCAP reached out to each of the establishments repeatedly over a significant period of time before taking legal action. In every instance, the establishment refused to obtain a license, but continued to perform ASCAP members' music without permission, resulting in the filing of the infringement actions. [Market Wire]

I'm all for artists getting paid, but who thinks a bar should have to pay an artist if a DJ plays a song? Last I checked, all the record labels wanted DJs to play their stuff so bad, they were giving it to them for free. It's hard to hate on anyone sticking up for artists, or for going after cheesy, "racist", overpriced & rude establishments like Hiro Ballroom, but it still seems a little silly to sue bars for this. Maybe it's my own 'indie' point of view. According to one anonymous commenter in the past,

the "performers rights" organizations don't even track the individual compositions that are played at a particular venue. The money all goes into the same place and is distributed to the top-selling artists as roylties. Whether or not the venue plays those artists' compositions or not is irrelevant.

I think that if you play the top-selling artists' music, you SHOULD have to pay them. On the other hand, if you're playing more underground-type stuff, you're actually paying the artist by promoting their music for free to people who would otherwise never hear them. I guess that it would require too much effort though for companies like ASCAP to make the distinction.

The laws for copyrights were established at a time when "music business" was strictly for the elite and there was, obviously, no such thing as indie-rock.