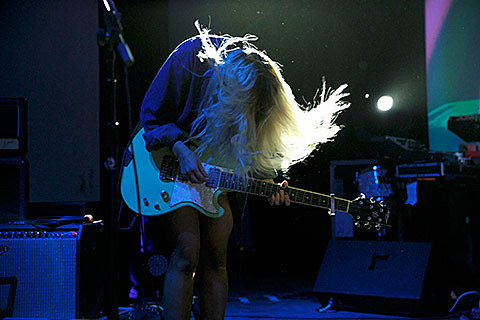 Last week we posted that Dam-Funk were added to Brooklyn Night Bazaar's upcoming slate of shows on March 7. Since then, BKNB have announced even more of their spring schedule, with some pretty cool artists planned for the next couple months, including Ash, Guards, No Joy, Young Galaxy, Fear of Men and more.

Montreal widescreen synth pop combo Young Galaxy will play on Saturday, March 15 with American Royalty (who just played Baby's All Right), Bowmont, and Late Guest at the Party. That's the second of two nights presented by T / My Free Concert -- the Friday (3/14) show being Guards and more TBA.

On Saturday, April 5, it's long-running (and underrated) Irish band Ash (who lived here in NYC for a while) who will play with Run River North, and Golden Suits. That's part of a weekend presented by Pandora, with Bronze Radio Return, Boston's Gem Club (here not that long ago), and The Suzan playing on Friday, April 5.

Then the weekend of April 18/19 is presented by Insound and Kanine Records. The Friday show (4/18) is with UK band Fear of Men whose new album will be out around the time of this show, plus Drew Citron and Frankie Rose's band Beverly (whose new song we dig a lot), Toronto's Alvvays (who just played with Yuck at Bowery) and Florida band Beach Day. Then for the Saturday show (4/19), it's Montreal's No Joy, Philadelphia's Bleeding Rainbow (new LP and NYC release show at the end of Feb.), felow Philly band Little Big League, and a second appearance by Beach Day. Note that Saturday is also Record Store Day, so if you blew all your money on limited edition vinyl, remember Brooklyn Night Bazaar shows are free. Beverly, Beach Day and Bleeding Rainbow all feature on Kanine RDS compilation Non Violent Femmes.

Lastly, Friday, April 25 will play host to Total Slacker (who just had a record release party) and Reputante.

The Jon Spencer Blues Explosion just played BKNB this past weekend and this weekend it's Widowspeak, Jessica Pratt, Porches, Ponyhof on Friday (2/21); and Savoir Adore and more on Saturday (2/22).