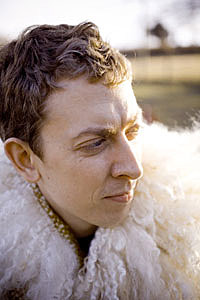 In December, Asthmatic Kitty signee DM(Dave) Stith released the Curtain Speech EP, a five song collection (featuring the 7-minute epic "Just Once") that put him on the indie-pop radar.

On Friday, February 27, Stith will visit the Cake Shop for an early 8:30pm set on a bill that includes local spaz-rock Pterodactyl, Chicago's Sonoi, and a TBA.($7, 21+)

Stith's full-length, Heavy Ghost, out March 10, will feature guests that include Shara from My Brightest Diamond, and Asthmatic string-puller Sufjan Stevens (performing on "stapler, scissors, and a stationary fan" - via Stith's Dec 18th blog). The album, "recorded in bedrooms, churches, kitchens and instrumental rehearsal halls around the East Coast," comes packaged in a sleeve desgined by Stith, a graphic designer.

DM Stith also visited Daytrotter about a week ago. Of the session he says, "If you listen to only one, make it 'Braid of Voices.'"

His new record's first single,"Pity Dance," just came out on iTunes, with a video (see below), and a b-side a cover of Randy Newman's "Suzanne." 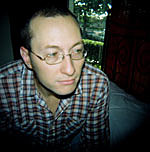 Stith labelmate and fellow ghost-lover Chris Schlarb is performing his 2007 debut, Twilight & Ghost Stories, on Saturday, Feb 7th at The Stone with 8pm and 10pm sets.

The album, an adventurous, contemplative found-sound composition, was pieced together from snipets submitted to Schlarb by fifty musicians. It was "performed" in Athens, GA, on December 8, 2007, using only Section IV (of X). You can read the full story here), and check out a piece of the performance, which Schlarb titled "Twilight Athens" (MP3 above).

On the Red Hot benefit comp Dark Was the Night, due next Tuesday, Stith contributed backup vocals to the Sufjan-Buck 65-Serengeti track, "The Blood Pt. 2." The song remixes the Castanet's "You Are the Blood," which Sufjan also covers, and extends to nearly 11 minutes, on the album.

Asthmatic Kitty's Rafter was just in town and played a show at Cake Shop. All DM Stith dates, the video, and new album tracklist, below...