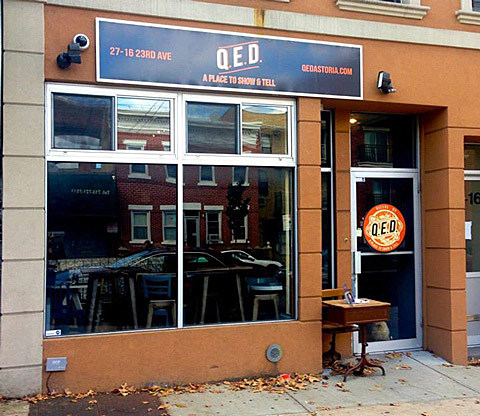 One of NYC's most interesting and criminally overlooked-by-me venues has to be Astoria Queens' multi-use space Q.E.D. The place opened back in November of 2014 and has since played host to an incredible array of performances, lectures, comedy events, and more and someone should probably punch me and the yams for waiting this long to blab about it. Q.E.D. was started by a superior lady named Kambri Crews, a long-time producer and promoter of stand up comedy who, for four years, served as the Director of Marketing and PR for the comedy club Comix. During that time she also created and ran the 50-seat venue Ochi's Lounge. Those are two venues I miss very much. She followed that by becoming the comedy booker for the 92Y Tribeca. Kambri is also the author of the heartbreaking memoir Burn Down The Ground and an accomplished public speaker and storyteller, giving speeches and performing around the USA.

Q.E.D. is very much a venue for the people, by the people. Not only do they present us with a staggering variety of their own free or cheap programming and classes, (like a special effects make-up class that looks crazy awesome on Saturday [June 27]), but they're also all ears if YOU want to teach a class or if YOU want to curate your own show. It's DIY without all the pretension and affectation.

And Kambri very much keeps her roots as a comedy producer and curator alive and well at Q.E.D. July in particular has a ton of great shows on the calendar, including such names as Aparna Nachrerla, "TV's Frank" Conniff, Myq Kaplan, Ted Alexandro, and more.  So when you're done cooking yourself to tumor city on Rockaway Beach, cool of at Q.E.D. yo!