Phyllis Chen and her instrument of choice (photo by Carrie Schneider) 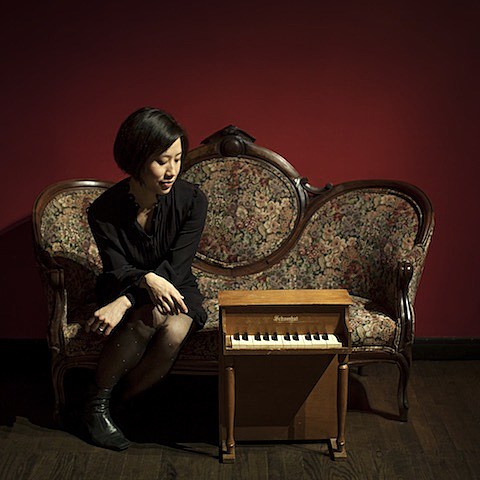 When I first visited Phyllis Chen's Queens apartment it slightly resembled the lab of a mad scientist, if you were to replace the bubbling beakers with toppling toy pianos. At times several of the instruments are strewn about, some no larger than a lunch box, and some accompanied by music boxes. Chen doesn't hesitate as she flips from one to the other. She can play them all with ease.

She began playing piano at five. It wasn't until training to be a classical pianist that she fell in love with the pinging, unrefined sounds of the toy piano, when she first came across the instrument being used as a set piece at a puppet theater.

"I touched it and fell in love with the way it sounded...and suddenly felt so much untapped musical potential for it," She remembers fondly.

Before it was considered a serious instrument, the toy piano was primarily used as a learning tool for young musicians. It took on a life of its own in 1948 when composer and pianist John Cage's Suite for Toy Piano catapulted the miniature muse into the spotlight, transforming it from a toy into a central ensemble piece.

Like many players Chen was influenced by Cage throughout her work. It didn't take long for the classically trained composer to make the toy piano a standard part of her repertoire, releasing five albums including the Strange Powers theatrical score written by The Magnetic Field's Stephin Merritt, a collaboration with Cuddle Magic and three solo albums. She's also received numerous grants and awards and is a found member of ICE, the International Contemporary Ensemble.

Chen fell in love with the instrument so much that she founded NYC's UnCaged Festival in 2007, shining a spotlight on the world's miniature music scene. The biennial toy piano festival attracts experimental musicians from all over the globe, which will soon happen again over four shows all of which are in Astoria, Queens: a free RSD Black Friday (11/27) event at Hi-Fi Records; December 4 at Museum of the Moving Image (tickets) and then a free afterparty at Uke Hut; and a family-friendly event at QED on December 5 (tickets). Details are below.

Much of Chen's time is spent preparing for the festival by curating musicians and finding new compositions for the tiny instruments, so far collecting 300 submissions to date. It started out as a contest to encourage composers to write for the toy piano and is now a jamboree of sorts, uniting unexpected performers from new musicians to seasoned veterans. 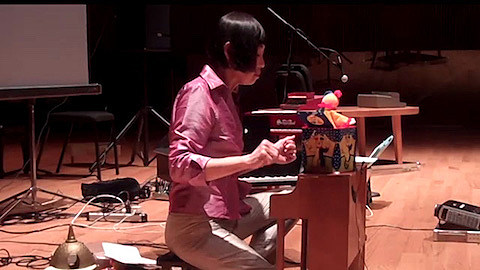 New York's tiny, but dedicated music scene is steadily gaining popularity through the festival. Margaret Leng Tan, New York's award-winning toy piano pioneer, who was the first woman to release an album on toy piano, is a regular judge at the UnCaged Festival. Tan appreciates the broad appeal of the celebration,"...it is cutting edge yet fun, and you don't have to be highly versed in music to partake..."

The festival also draws new talent and highly experimental musicians. Brooklyn-based Ranjit Bhatnagar, known for making his own instruments from various found objects and electronics, has performed several times at previous festivals. One of his most recent inventions is a toy piano robot made from salvaged pieces of a broken Piano Lodeon, a self playing toy piano that reads music from paper scrolls.

Bhantnagar explains, "My Piano Lodeon arrived all smashed to pieces by UPS, so I wanted to try to recover something from it, and the toy piano robot was born."

There will be no shortage of toys and live experimental entertainment at this year's festival. Bhantnagar and Chen will be pressing plastic records on an old vintage Fisher-Price record player music box and premiering them at the Hi-Fi opening night. 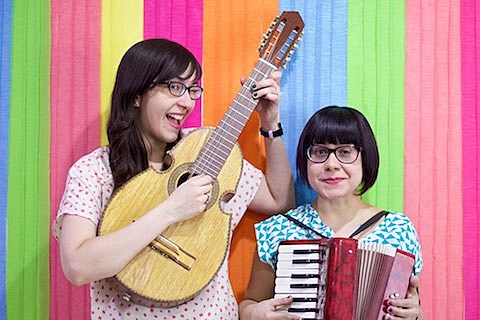 Brooklyn musician Angélica Negrón, who has curated concerts for El Museo del Barrio is also regular performer and judge at the festival. With her band, Acopladitos, she will be serenading festival-goers with her ever expanding repertoire, inviting children to participate in the whimsical world of toy instruments with sing-a-longs and games.

"I think the process of discovery is what I enjoy most in making music. There's really no telling where I'll end up, but I love finding new sounds and directions...I think the sound of an instrument, such as a toy piano, or another unique timbre, is enough for me to envision a picture or story."

Not all concert-goers know what to expect. When one attendee asked where the miniature musician was, Chen had to explain that she was full-sized woman who played small instruments. Still, Chen thrives off the unpredictability and doesn't mind surprising people.

During a performance she can be found crouched on a pillow with toy pianos, steel mixing bowls and music boxes surrounding her. Fear and awe converge as the audience watches her produce music from each toy and unlikely object in her tiny orchestra, transporting you into her musical dream-land.

"As kids, miniature things are symbols or examples of the 'real' world.  Miniature things seem to be the great metaphor for life," Chen describes of her love for tiny things.

This year the UnCaged Festival focuses primarily on introducing artists, rather than competition. The miniature music scene explodes into a three day extravaganza hosted by the Museum of Moving Image.  Featuring works for various toy instruments, including video, and sing-alongs, the pieces will range from playful to mysterious.

Full details of the UnCaged Festival's events are below... 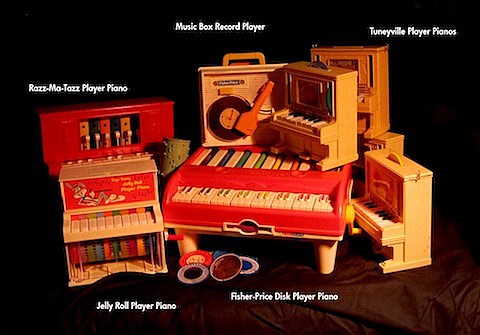 Come out on Record Store Day to see a fun miniature show at Astoria's new record shop, Hi-Fi Records! Ranjit Bhatnagar and Phyllis will team up to make some new tunes for the vintage Fischer-Price record player/music box along with some intimate toy piano pieces. This is a great opportunity for Astorians to come check out what the toy piano festival in town is all about.

The UnCaged Toy Piano Festival supports new works and performers on the toy piano, originally an educational toy invented in 1872 that was reimagined as a concert instrument in John Cage's 1947 "Suite for Toy Piano." For its third festival, UnCaged Toy Piano presents a whimsical audiovisual program that celebrates toys and play. The program includes:

This program will includes:

Kalimba by Karlheinz Essl (AT), animation by students of Bettina Ngy-Rumpf, animation coached by Thomas Renoldner (AT) performed by Tristan McKay

Curios (selections) by Phyllis Chen (US), video by Rob Dietz (US) performed by Margaret Leng Tan

Bring your kids out to the QED Astoria for a fun toy instrument Spanish immersion singalong! Acopladitos in Spanish means "bringing together in complete harmony." This a fun mommy and me class with beautiful original songs, toy instruments and games. Appropriate for kids 0-4 years (of any speaking language.)