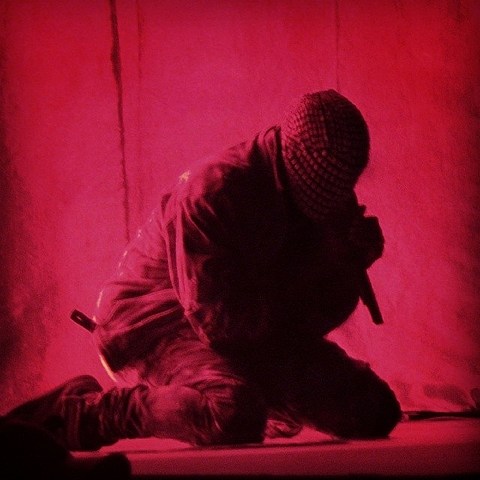 Though the big "news" seems to be Kim Kardashian's see through top (thanks Kanye for making Bonnaroo a place the Kardashians know about), our favorite Kanye related news was Frank Ocean's setlist. As CoS reports, Odd Future's R&B singer didn't end up playing any new songs, but he did play a number of hits from Channel Orange and Nostalgia, Ultra ("Thinkin Bout You," "Novacane," "Pyramids," etc) and his verses on Beyonce's "Superpower" and Kanye's "New Slaves." Speaking of, Kanye once again omitted Beyonce's husband from lyrics, possibly for not appearing at the ceremony where he recently became a husband (to the Bonnaroo newsmaker with the sheer top).

Kanye's controversial return to Bonnaroo wasn't delayed by hours this time, and included a ton of hits ("Black Skinhead," "Mercy," "Can't Tell Me Nothin'," "Power," "Jesus Walks," etc etc etc), but just on time for his New Year's resolution to be up (he promised to stop ranting for at least six months, apparently he meant that very literally), the set included plenty of rants. He referenced the 2008 controversy, yelled out "Where the press at? Fuck the press!," and compared himself to Shakespeare, Walt Disney, Genghis Kahn, John Lennon, Jimi Hendrix and still plenty more. Not everyone in the crowd took well to the ranting. Entertainment Weekly points out:

His outburst was met with violent boos and what looked like a mass exodus. Festival-goers headed away from the stage and began filling up U.K. dance duo Disclosure's tent early, punctuating their wait with eruptions of surprisingly well-organized chants of "F-k Kanye!"

A video from Kanye's set, his setlist and Frank Ocean's setlist, below...

Encore:
"Blood on the Leaves"