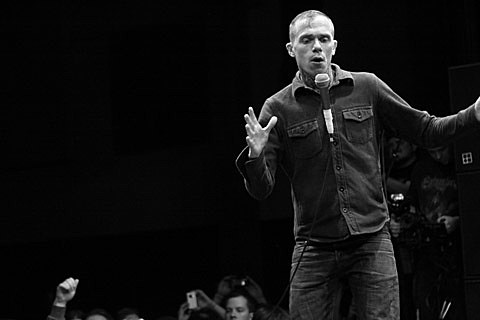 The always-huge Decibel Magazine tour has been announced for 2015, and this one features At the Gates, Converge (who played the mag's 100-issue celebration last year), and Vallenfyre (mems At the Gates, My Dying Bride, etc), with more openers to be announced. That is an absolutely stacked lineup. The reunited At the Gates are releasing At War With Reality, their first album since 1995, next week. Converge have been playing shows and are working on new material. Vallenfyre are playing Maryland Deathfest. These three bands are all as excellent as they are stylistically distinct, making this a must-catch for the heavier crowd.

All dates for the Decibel tour are listed, along with a stream of a new At the Gates song, footage of Vallenfyre's recent set at Obscene Extreme fest, and a cool video of Converge playing live, shot from a go pro camera on drummer Ben Koller's head, below...