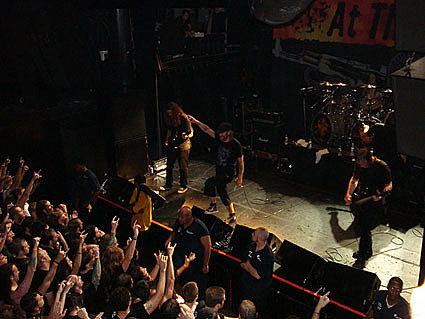 Night one has passed in..... ah, f it....let's just call it Metal Appreciation Week here in NYC. At The Gates / Darkest Hour / Municipal Waste / Toxic Holocaust opened up the festivities and by many accounts, to borrow from Parliament-Funkadelic, "tore the roof of the sucker". We have video and the setlist below, along with the latest Municipal Waste video, "Sadistic Magician".

They demonize Irving Plaza (the Fillmore) once again tonight (July 10, 2008), but with a little friendly competition. Fangsanalsatan (aka Atsuo) and his band Boris, along with the mighty Torche, & Cave-In-er Adam McGrath's Clouds (who recently dropped the lovely We Are Above You) are playing Webster Hall.

Metal Appreciation Week then continues with Jucifer for FREE on Friday, Monstrosity/Sourvein/Demiricous/Javelina on Monday, Architect on Monday, and Jucifer/Bloody Panda on Tuesday.

At The Gates "Under a Serpent Sun" @ Irving Plaza