post-reunion At the Gates performing in 2011 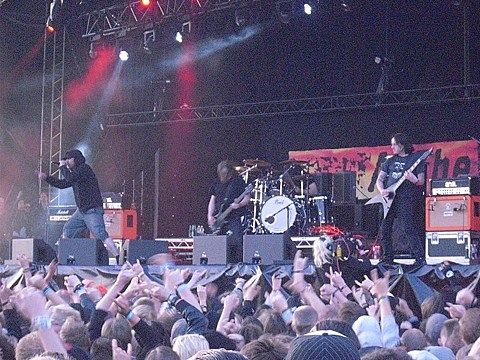 There's a pretty good argument to be made that At the Gates's 1995 swansong Slaughter of the Soul was the most influential metal album to come out during the '90s. Even if you don't think much of the many imitators it spawned, it's hard to dispute the album's quality; there's a reason that their 2007 reunion and ensuing festival appearances have drawn such enthusiastic responses.

This stature also explains the somewhat breathless coverage that a 12-second teaser video that the band posted on Tuesday received. The video was totally vague, containing nothing but some grainy, out-of-focus shots of lyrics in a Word document and blocky "2014" flash caption, but it was enough to initiate speculation that ATG will do the Carcass/Gorguts thing this year and release a reunion album.

The band posted a second teaser video today. If nothing else, this one will add fuel to the speculative fire -- you see a photo of the band, some (grainy, blurry) closeups of plugins and waveforms in a production program, shots of microphones and guitars, and those lyrics again. The phrase "AT WAR WITH REALITY" (album title?) and "2014" flash across the screen. So yeah, no definite confirmation yet, but this looks an awful lot like the initial PR push for a new At the Gates album. If it is, let's hope that they can live up to the rather high bar set by last year's crop of '90s death metal reunions.

Watch both teaser videos and stream Slaughter of the Soul in full below...