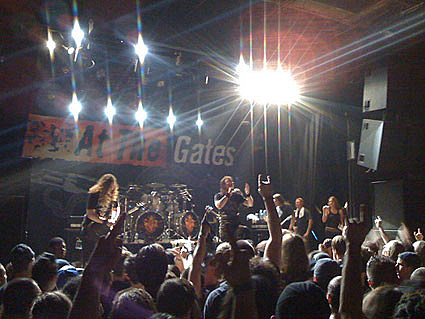 It doesn't matter what kind of band you have, if you have a room full of people who let go of the ol' jaded-NYC-crossed-arms-seen-all-before thing - it's gonna come off well. That's exactly how it went down with At The Gates last night at Irving Plaza (July 10, 2008) It was their second NYC show in a row, and the second show of their North American "Suicidal Final" reunion tour. While they were technically excellent and crowd-participation was on high (to say the least), I wasn't blown away by their stage presence or their mostly stoic stage show. That said, the sound was excellent from my vantage point and I almost wanted to be one of THOSE guys..."Dude, I was in the pit for AT THE GATES!" Remember, I said almost. Video from the show and setlist follows.

At The Gates - "Slaughter Of The Soul"