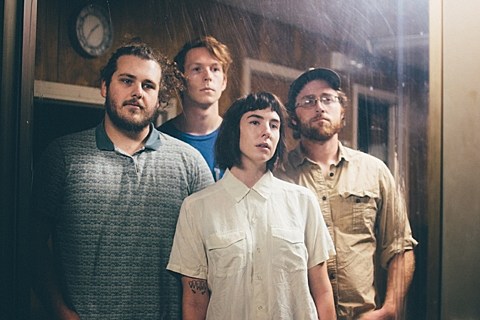 Athens, GA's Mothers began as the solo project of Kristine Leschper, but has since tranformed into a full band with Matthew Anderegg (drums), Drew Kirby (guitar), and Patrick Morales (bass). Their first full-band offering is "No Crying In Baseball," which premieres in this post. It sounds like there's a definite Angel Olsen influence here, both in the fact that Kristine's voice is similar and the way it combines old timey folk with indie rock.

It's a one-off single ahead of their TBA debut album (due in 2016), which was produced by Drew Vandenberg (who's mixed/engineered Deerhunter and of Montreal albums and played on Microcastle/Weird Era Cont.) and features vibraphone from Deerhunter's Josh McKay and bass and string arrangements from McKendrick Bearden (of Grand Vapids). Listen to "No Crying in Baseball," watch a live video of Mothers playing it, and read a quote from Kristine about the song, below.

Mothers are also going on tour this month and next. They play a few dates of of Montreal's tour, including Asbury Park's Asbury Lanes on Sunday (8/23) (tickets).

They also have three of their own dates in NYC. Those happen September 9 at Rockwood Music Hall, September 10 at Pianos and September 11 at Berlin (Jesse Malin's new club that we were talking about earlier today).

Kristine Leschper on "No Crying In Baseball":

"No crying in baseball" feels like a small, personal victory. Over the course of several months I tried to make sense of it, stabbing in the dark at indistinct ideas of it, finding that in order to bring it to fruition I would have to first cut my teeth on other songs. In my mind it represents a tangible shift towards a sharper, more unapologetic embracement of discovering fortitude in hypersensitivity. At first glance it is brash and accusatory, but stripped to its undergarments it really is a testament to vulnerability. It's about how entirely possible it is to be soft and subtle and simultaneously aggressively forceful. The song was the culminating result of an infinite spectrum of frustrations and doubts regarding my internal drive and work ethic vs. those around me - specifically the fear that no one is trying hard enough, not even me.