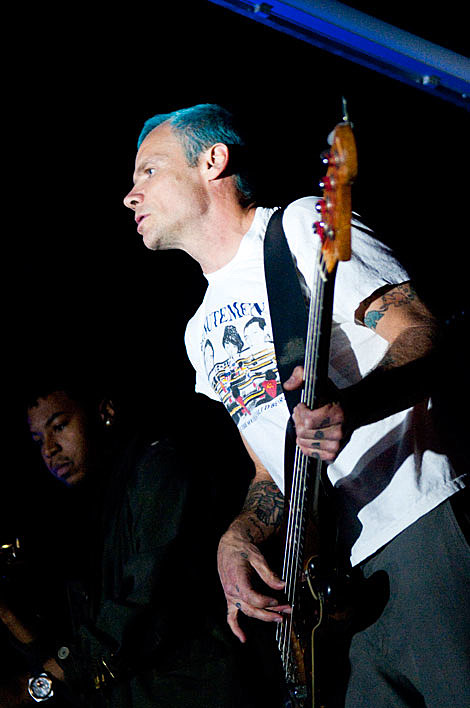 "An underground fire caused chaos in midtown Tuesday afternoon, sending flames into the streets, shutting down Broadway shows, and leaving hundreds of tourists without a place to stay. At about 4:30 pm a transformer fire burnt three 13,000 volt cables, causing a three-alarm fire. Over a 130 firefighters rushed to the scene to put out the flames. Amazingly, there were no reports of injuries. Among the four buildings that had to be evacuated was the Novotel Hotel after high levels of carbon monoxide were detected in the basement. FDNY Deputy Chief Jay Jonas told WPIX that the levels reached as high as 700 parts per million, which is enough to "kill someone with just a few breaths." Tuesday night's performance of Jersey Boys was also canceled due to the fire." [Huffington Post]

Jersey Boys is right next door to Roseland Ballroom where Atoms For Peace did end up playing their second of two NYC shows last night (4/6). It almost didn't happen. There was at least an hour or two where the venue wasn't sure if they were going to have to postpone it. 52st street was closed and it was madness around the venue - even after the show the street was still closed (people were herded out along the sidewalk as cops made sure that nobody hopped the barrier and went into the street). To get in to the show, which ended up opening hours late, people had to enter through the 53rd Street back door. Ironically, all tickets were will call to keep away scalpers. That meant thousands of people had to start checking in not long before the opener was originally scheduled to start. Some people waited hours, but luckily set times ended up being pushed back an hour. I missed Flying Lotus who played while many people were still stuck on the street. Thom Yorke, Flea, Joey Waronker, Mauro Refosco and Nigel Godrich (aka Atoms for Peace) took the stage to an extremely packed house at 10:03.

Not one for many words, Thom Yorke (and band) immediately started playing his solo album The Eraser from start to finish. I was anticipating some funny commentary from Thom on the craziness that preceded their set, but all we got was a quick (not an exact quote) "interesting afternoon, huh?" after the 2nd song (which i think he followed with something like, "my friend texted me and said he was drinking all day and tired and that I should hurry up and start playing"). After the nine song album, the band left the stage and Thom came back and did three songs solo (guitar and piano) including Kid A's "Everything In It's Right Place" which got the loudest cheers of the night. It was one of a few Radiohead songs in the setlist (they also played "Fog" and "Paperback Writer") (there were no Red Hot Chili Peppers songs) (but it would have been kind of awesome if they actually did play one). Thom's other solo song was a cover of Mark Mulcahy's "All the Best" which he recorded for that recent tribute album. He reportedly never performed that one live before which was also true about the new song he played at the first show (but not play again at this one).

Like the night before, the full band came back for the last four songs. Relatively speaking, Thom started to get more talkative at that point, but the banter was basically limited to naming the song they were about to play and mentioning that we might be able to buy the recent single (from which they played both songs again to close the show). Speaking of buying, the ticket price was expensive, $40 t-shirts are a disgrace, it was a major pain getting in (not anyone's fault), and the whole show was only about 80-85 minutes (Wilco's recent shows in NJ were each longer than both nights of Thom combined - I know, they have much more material). Those details were definitely all a little off-putting, but the show itself was great. Watching and listening to Thom perform is definitely something special. Throw in Flea on bass and you have two very dynamic (and talented) characters sharing a stage in what felt like a rare treat complete with a super tight supporting band and colorful light show.

Pictures from the first night HERE. Videos from the show, of the line, of the manhole exploding, and the full setlist below...

part of the line 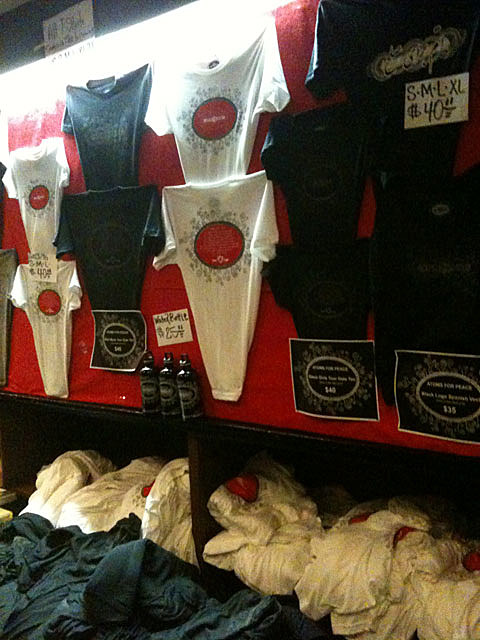 Compare that to the setlist from NIGHT ONE. More Pictures from the first show HERE. Tour dates HERE.