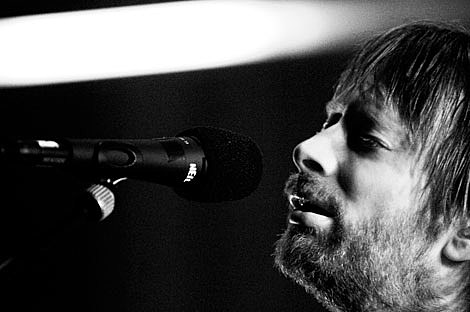 Yesterday we mentioned that Thom Yorke's Atoms for Peace project (which also includes Nigel Godrich and Flea) dropped their new single, "Default," on iTunes and that the single for the track will be out on September 10 via XL. You can now listen to that song below. Thom also announced that he plans to release a full length album with the project in 2013. Here's what he said today:

You may have heard that I have a new project called Atoms for Peace.

The name comes from some shows of The Eraser that happened a couple of years ago with Mauro, Joey, Nigel and Flea.

We got a big buzz from them and discovered loads of energy from transforming the music from electronic to live, and so afterwards, we carried on for a few days in the studio and decided to make it a loose, on-going thing.
Immersed in the area between the two...electronic and live.

The first tune we'd like you to hear is Default
A 12" vinyl version will follow next month and an album will eventually follow that next year.
Thom

As mentioned, Atoms for Peace will DJ Warm Up at MoMA PS1 on Saturday (9/8) with Holy Other, Maria Minerva, Rustie, and Justin Strauss. Advance tickets for that show are sold out but a limited number will be available at the door starting at noon.

In related news, Radiohead performed at the Moody Theater in Austin this past March for an episode of Austin City Limits. Last night (9/6), it aired on a screen in Austin's Republic Square Park for the first installament of ACL in the Park. The performance will air on PBS stations for the 38th season of Austin City Limits on October 6. Other performances which will air this season include Bon Iver (10/13) and The Shins (10/27).

Listen to Atoms for Peace's "Default" below.