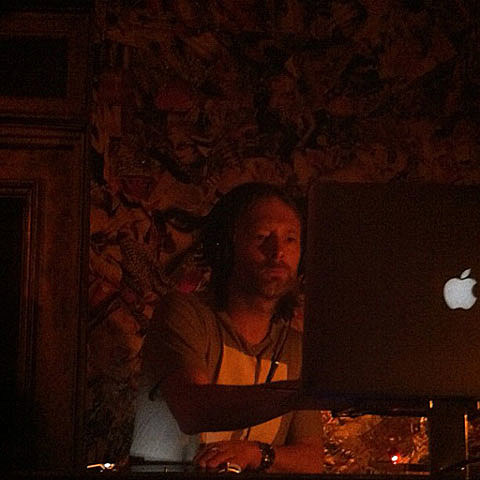 Thom Yorke came to NYC over the weekend and DJed a Fashion Week party for Rag & Bone (whose co-designer Marcus Wainwright is a friend of Thom's) at The Wooly on Friday (9/7). A picture of Thom during his set at the Belvedere Vodka-sponsored party is above. Aziz Ansari was in attendance too.

Thom also, as discussed many times, did an Atoms for Peace DJ set for the final installment of this summer's Warm Up at MoMA PS1 with AFP bandmate and Radiohead producer Nigel Godrich. Atoms for Peace just announced that their new album will come out next year, and to open their set, Thom and Nigel performed three new tracks that will presumably end up on that album with Thom singing live. You can watch videos of two of those new songs, and listen to audio of the third below. After the short unexpected live performance, Thom returned to the boards for the remainder of the show and spun a variety of tunes (everything from Talking Heads to Azealia Banks). 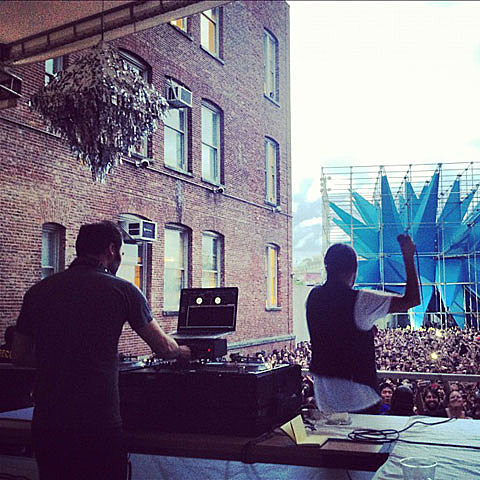 The rest of the lineup at Warm Up was great too. Despite a crazy storm, the show went on, opening with a set by Justin Strauss. Then Maria Minerva, who also did a Fashion Week show, just released new album, Will Happiness Find Me (stream it), and who now lives in Brooklyn (after moving from Estonia to London), played a live set. You can catch her in NYC again at Glasslands on Friday (9/14) with Father Finger and Octo Octa (tickets).

Up next was Holy Other, finally making his NYC debut, after having to cancel shows last summer due to illness. The elusive producer, who in a recent interview with Stereogum said he was "going to feel naked" performing outdoors during the day, played material off his excellent recently released debut LP, Held, and 2011's With U EP as well. A video from his set is below. The MoMA PS1 show fell in the middle of his tour with Amon Tobin, which hits the NYC area on Thursday (9/13) at Wellmont Theatre (tickets) and Friday (9/14) at Hammerstein Ballroom (tickets).

Before Thom Yorke and Nigel Godrich finally took the stage, we were graced with one more set, this time by Scottish producer Rustie, who played Webster Hall with Flosstradamus and Brenmar the night before (9/7). He dropped bass heavy tunes that got the crowd going pretty wild. A couple videos from his Webster Hall show are below (unfortunately, the sound cuts out about halfway through).

Check out all those videos below...