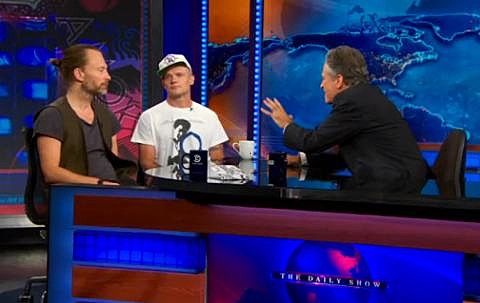 Atoms for Peace are in NYC currently, getting ready for their big show at the Barclays Center on Friday (9/27). While here they stopped by The Daily Show last night (9/25). Thom Yorke and Flea talk with Jon Stewart a bit about how a supergroup like this forms and then the band played "Default" and "Harrowdown Hill" (from Thom Yorke's Eraser) over the closing credits. Video of their appearance is in this post.

In other related news, Atoms for Peace are now selling a jigsaw puzzle, via their website, of an illustration (above) by Stanley Donwood who does their artwork as well. The 192-piece laser-cut wood puzzle, titled "Los Angeles," shows the titular city facing apocalyptic events and is pretty small - 360mm X 250mm (a little bigger than a legal pad). It's not cheap ($106) but you can buy it here.

Atoms for Peace's Amok came out back in February. Tickets are still available for their Barclays show. Videos from The Daily Show below...