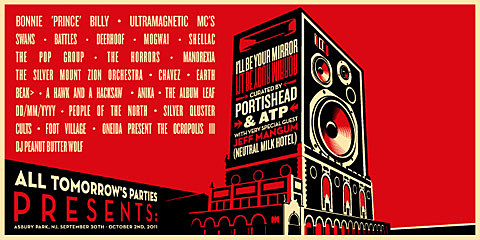 "Can we assume they'll be added to ATP, which starts a few days after the Bklyn date?," asked a commenter in the comments of our post announcing the Swans show at Music Hall of Williamsburg, and that commenter was dead on.

ATP NJ (aka "Ill Be Your Mirror") has updated its previously announced lineup to include Swans, Peanut Butter Wolf (who will be DJing), Battles, Deerhoof, Jim Thirwell's Manorexia, and Oneida (who will again perform in Ocropolis formation, like in 2009) "ONEIDA PRESENTS THE OCROPOLIS III which will take place at the Asbury Lanes Bowling Alley - the band will perform continuously throughout the day, sometimes with guests from the rich array of musicians also performing in the festival, sometimes alone and mostly improvised."

Though 3-day passes for the Asbury Park Fest, which include your only shot at seeing Jeff Mangum, are sold out (now called the Jeff Mangum Three Day Pass), tickets are still available in multiple incarnations for the three day celebration, including a new "Portishead Three Day Pass" which allows "passholders to see everything else from Friday-Sunday as well as giving priority access with the day pass holders to BOTH Portishead shows on Saturday and Sunday" (the pass doesn't include entry into Jeff Mangum). The "Portishead Three Day Pass" will go on sale at 10AM EST Thursday (4/21) and individual day passes are currently on sale. The versions of the 3-day pass that are sold out only guarantee you one night of Portishead. "Existing Day ticketholders or Jeff Mangum Three Day pass holders who wish to switch to a Portishead Three Day Pass should contact ATP via feedback@atpfestival.com before May 30th."

The current lineup is below.