Shepard Fairey is also DJing the event on Sunday 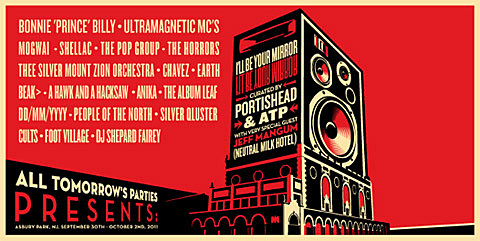 ATP Asbury Park ("I'll Be Your Mirror") has released the second wave of artist announcements including many of Portishead's choices for the bill! We already knew about Jeff Mangum, Bonnie Prince Billy, Shellac, Chavez and more. New additions include, not surprisingly, Portishead-related acts Anika and Beak> (and this time Anika will be performing live and not just DJing). There's also now a rare reunion of The Pop Group, an Ultramagnetic MC's reunion (WITH Kool Keith), Silver Qluster (Simeon of Silver Apples and Hans-Joachim Roedelius of Cluster/Harmonia), Thee Siliver Mt. Zion Memorial Orchestra, Mogwai, Earth, The Horrors and more. The full list is below.

Jeff Mangum also just announced a slew of other shows aside from ATP Asbury Park, including a UK ATP.

More details, a bigger Shepard Fairey-designed poster, and the full schedule below... 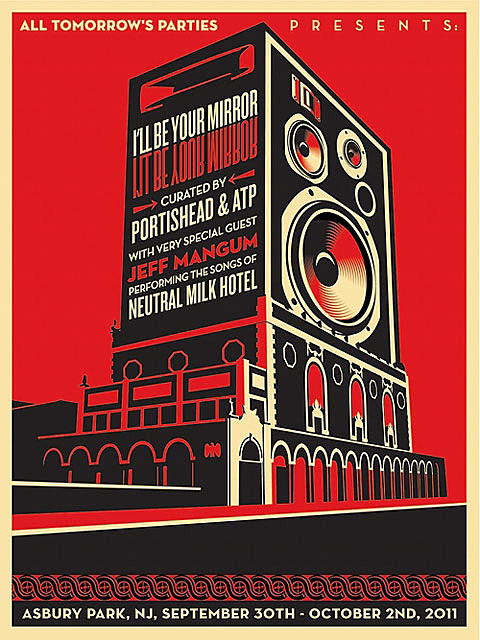 As recently confirmed, All Tomorrow's Parties returns to the USA this September in the new location of Asbury Park, N.J. bringing an I'll Be Your Mirror event to the iconic Asbury Park waterfront. For the inaugural American I'll Be Your Mirror, Portishead will curate and headline their first East Coast shows since 1998 on the Saturday and Sunday!

I'll Be Your Mirror is a new series of artist curated music, film and art events. Acting as sister events to the ATP Festivals, which take place in holiday resorts, I'll Be Your Mirror retains the curatorial and multiple band and film concept, but will take place in cities worldwide. The events are named after the b-side to The Velvet Underground's original All Tomorrow's Parties 7" single, released in 1966.

Three Day Passes for the festival sold out in just 72 hours, with Single Day Passes for all three days available now - fans should be advised that tickets for this event are selling much faster than in previous years. Please note that as Jeff Mangum wishes to play in the stunning but smaller Paramount Theatre on the Friday, only Three Day Pass holders will get access to that performance.

Our newly confirmed poster artist for this event is the already iconic Shepard Fairey who will also DJ on the Sunday. Special event posters that he has designed featuring the Asbury Park Convention Hall and Paramount Theatre as a speaker will be available exclusively at the event.

Today we can start to confirm more of the amazing line-up for Saturday and Sunday as curated by Portishead...

For Saturday 1st October which is headlined by PORTISHEAD we are first of all very excited to confirm that the classic line-up (Kool Keith, Ced Gee, TR Love) of the legendary ULTRAMAGNETIC MC'S have reformed for this event! THE HORRORS also play this day, and they are joined by an extremely rare U.S. performance from reformed post-punk luminaries THE POP GROUP and we can also confirm a very special collaboration between Simeon of Silver Apples and Hans-Joachim Roedelius of Cluster/Harmonia under the name SILVER QLUSTER. Other acts confirmed so far for the Saturday are BEAK> (feat Geoff Barrow of Portishead) and FOOT VILLAGE with much more to be confirmed!

For Sunday 2nd October which is also headlined by PORTISHEAD we are very pleased to present one of the best live bands on the planet MOGWAI, Canada's stunning THEE SILVER MT. ZION MEMORIAL ORCHESTRA, Dylan Carlson's legendary EARTH plus appearances from the Oneida affiliated PEOPLE OF THE NORTH, ANIKA and last but not least DD/MM/YYYY with much more to be confirmed.

Friday Day Passes are $60 - (these do not include the Jeff Mangum show in the Paramount but include everything else on that day.)

3 Day Passes are now SOLD OUT

DAY PASSES ON SALE NOW FROM SEETICKETS & TICKETMASTER via www.atpfestival.com

+ more to be confirmed

Jeff Mangum's previously announced additional show on the Monday after the event is also now Sold Out.

Asbury Park and it's surrounding area has a wide variety of accommodation options many of which are listed on our website.

Trains: Asbury Park station is an easy train journey from New York Penn station - trains run back to NYC until just after midnight and start again at 5am the next morning. Trains run direct from Newark International Airport down the North Jersey Coastline to Asbury Park. Check the New Jersey Transit website for more info on connections to other areas of New York and New Jersey: http://www.njtransit.com ATP will operate shuttle buses from Asbury Park station to the main venues and back.