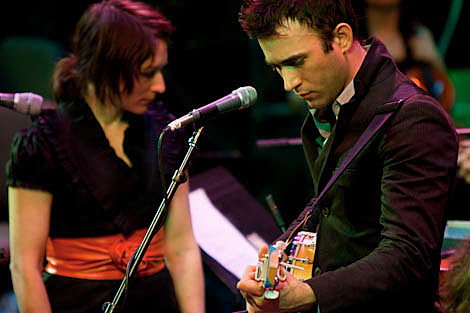 We are extremely excited to announce the addition of Sufjan Stevens to the ATP-curated Saturday lineup. Stevens, who will be releasing Run Rabbit Run (a re-arrangement of his 2001 album Enjoy Your Rabbit) in October, has not played a US show in over two years, and this is sure to be a special performance. [ATP NY]

Sufjan is one of the most recent additions to ATP NY, running September 11th-13th in Monticello, NY. It'll be his first show in a while, though over the past year Sufjan has made appearances joining St. Vincent at BAM, The Welcome Wagon at St. Paul's Lutheran and the Clogs with My Brightest Diamond (which you can see above) again at BAM .

Sufjan will be joined on the Saturday bill by new additions Shellac, Circulatory System and Grouper (who we previously announced).

On the Sunday, the Flaming Lips-curated bill has added Crystal Castles, who has been touring North America and Europe. They're also on the schedule for All Points West on August 1st.

Other Sunday additions are Super Furry Animals (who are also playing Maxwell's and Highline Ballroom), Boris, Low Lows and Oneida, the latter of which will perform a special set, described below...

"Oneida presents the Ocropolis" - where Oneida will transport the impetus, spirit and community of their multidisciplinary studio/performance space, The Ocropolis, to ATP for a full day of improvisation, collaboration, and recording, combined with the astounding Mighty Robot Visuals light crew.

Limited tickets for the fest are still on sale. Ongoing coverage of ATP NY and related NYC-area shows HERE. Full lineup so far below...

and:
The cinema for the weekend is hosted by Criterion. Expect more of the same greatness in 2009, with no-holds-barred programming both musically and otherwise. Capacity limited to just 2800 people!