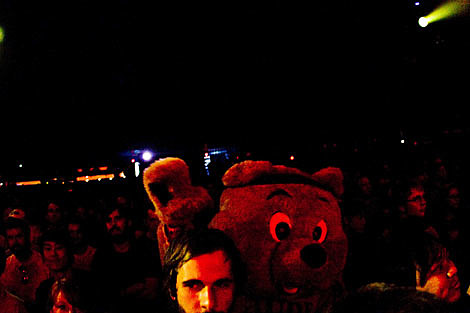 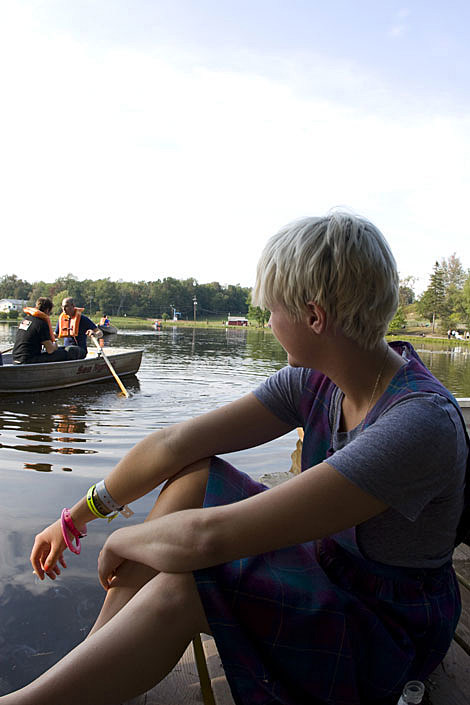 After a great (and late) Saturday-night, morning (3pm) bloomed with Robin Guthrie (co-founder of Cocteau Twins) and his shimmering ambient soundscapes in the main room. Backlit by projections of fractals and waves, it was the perfect way to ease into Sunday. Le Volume Courbe and Wounded Knees (both opening for MBV tonight at Roseland) had already played on stage two, but sadly, I missed them.

While Guthrie shined on, I scooted on over to stage deux and caught a few minutes of sunny pop by The Lilys (opener for MBV in NYC night two). 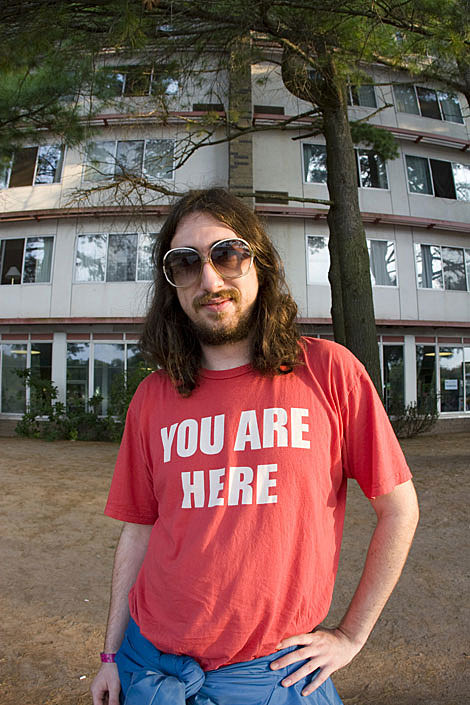 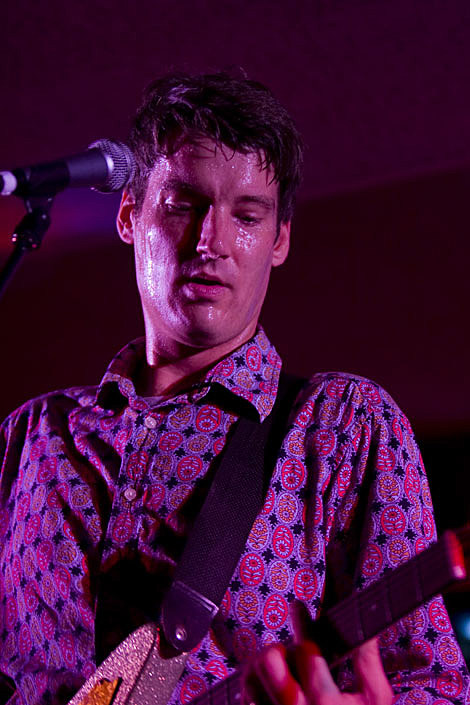 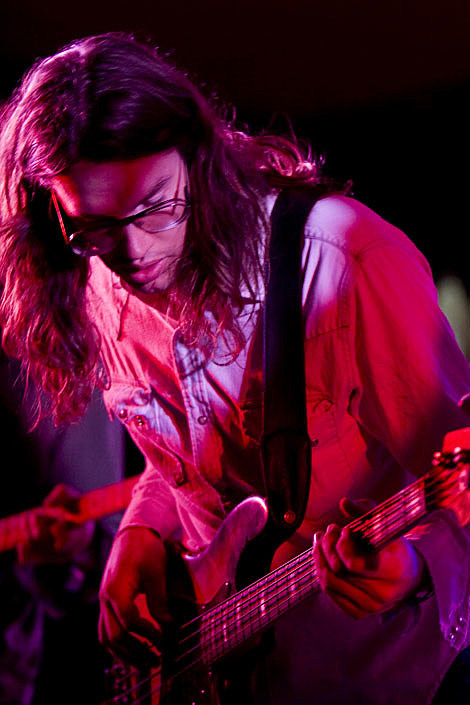 Kicking off with a reworking of the title theme from "Rocky", Erick Sermon & Parrish Smith (aka EPMD) took to the main stage following Guthrie. EPMD's low-energy set drew from their catalog of classics, but also threw in Sermon's Marvin Gaye-sampling hit "Music" as well as a shout to "the underground heads", "Headbanger" from Business Never Personal. 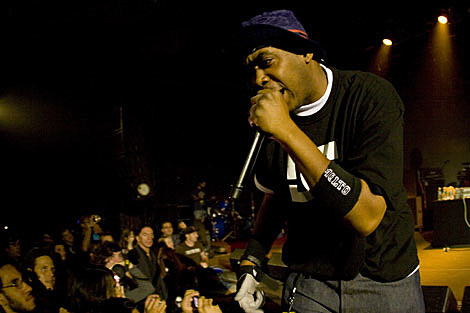 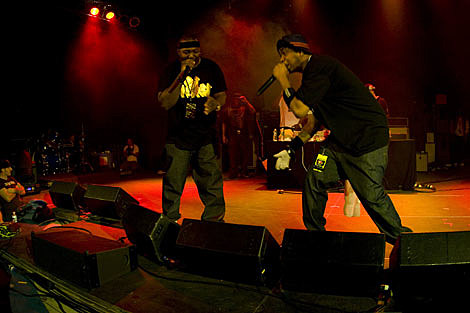 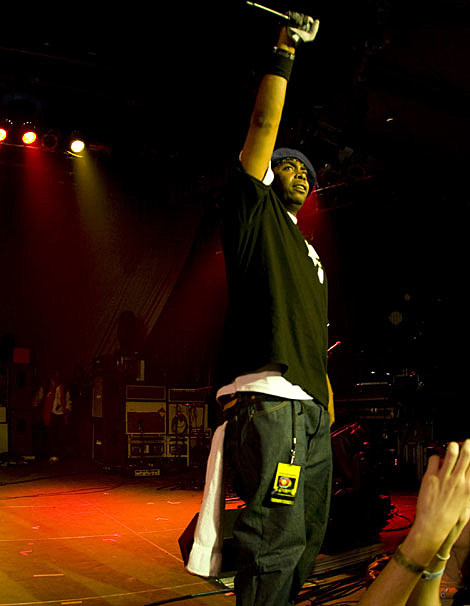 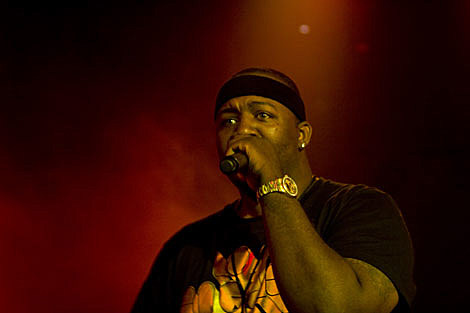 The staggered sets allowed me to catch a few minutes of the enchanting Gemma Hayes on stage two, who covered (and reworked) Kevin Drew's "TBTF". Gemma is also an MBV US tour opener. 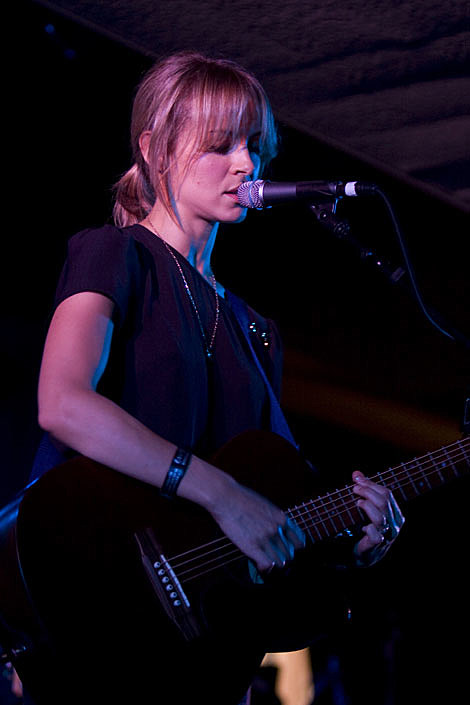 After Gemma, I took a break (had to miss Mercury Rev and Spectrum) to meet up with the lovely lads of Fuck Buttons who had performed on Saturday. Look for our short interview coming soon. 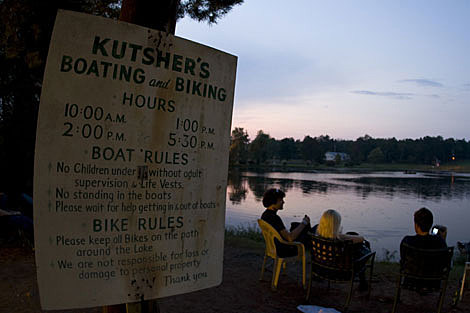 Kutscher's country club is U-shaped with a pond in the center. When our esteemed photographer Zach Dilgard realized that you could paddle around that lake in rowboats (called "Nymphs"), he and I convinced Om (who also played Saturday) to take a boat out with us while we picked their brain. Stay tuned for that interview and photo session coming soon as well.

After paddling around the pond and narrowly avoiding a round of "bumper-Nymphs" (great navigating Om), I got my land legs back during Yo La Tengo. Old reliable sounded great as usual, but sets were running late so I had to cut out after two songs to check out And You Will Know Us By The Trail of Dead. 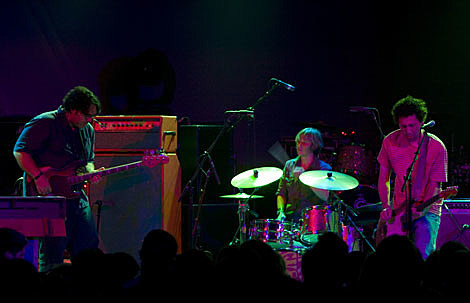 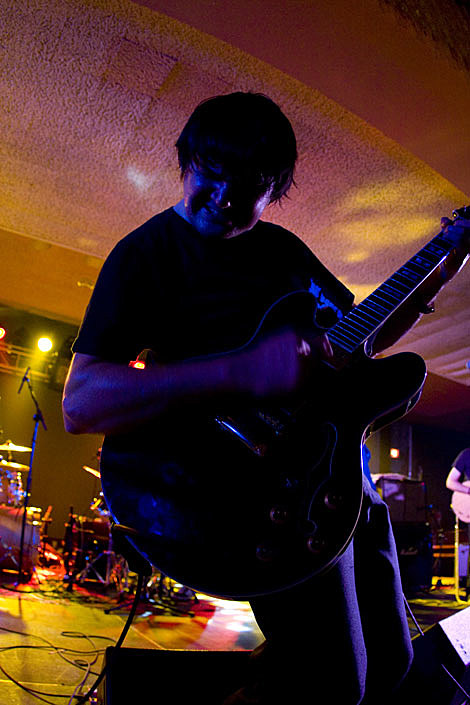 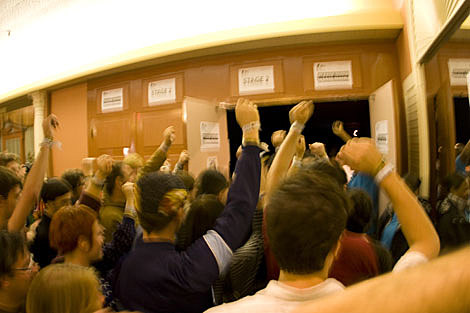 Trail of Dead (stage two) had a sign up on their merch table saying that they would be adjusting their set time to make sure they could catch Mogwai (stage one), and vice versa. Sure enough, as I was running from Yo La Tengo to catch Trail of Dead (about a 5 minute trip from stage one to stage two), I ran into TOD-fan Stu from Mogwai making the same hurried dash. Trail of Dead absolutely killed the second stage. From there I rushed back (left a touch early even) to find a good vantage point for the Glaswegians on stage one.

Opening with two songs from their triumphant new record The Hawk is Howling, Mogwai proved that they are one of the few bands that can simultaneously tug at your heart and rattle your chest. The kings of the crescendo drew mostly from The Hawk is Howling, but also peppered their set with a few oldies such as "Friend of the Night".

Dinosaur Jr followed Mogwai on the main stage and lived up to their voluminous reputation, as J Mascis cranked out leads from in front of his two Marshall Plexi full stacks and Hiwatt full stack (sorry, gear nerding out this weekend). Barlow and Murph would not be undersold; the rhythm section matched Mascis's power, note for crushing note. I caught most of their set before heading for a change of scenery, relative rest for my ears, and The Brain Jonestown Massacre. I completely missed Bob Mould who played between TOD and Brian Jonestown on stage two.

From there it was off to My Bloody Valentine which I already told you all about.

All in all, I think the entire weekend can be summed up with some on-stage banter between members of The Brian Jonestown Massacre:

"This whole thing is like a weird dream where all of your favorite bands are all playing at once."

"Except you aren't getting any sleep". 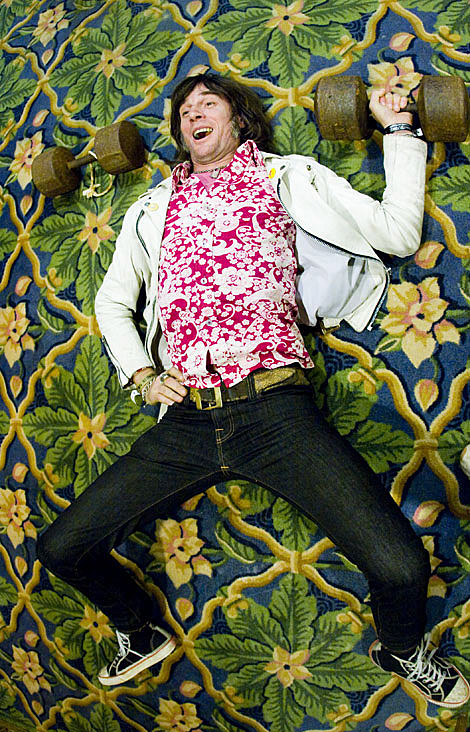 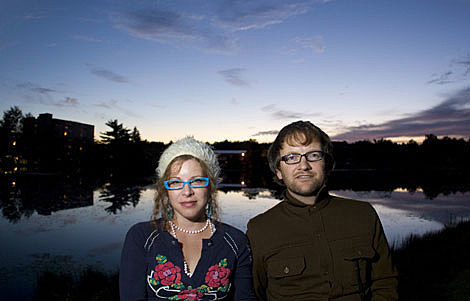 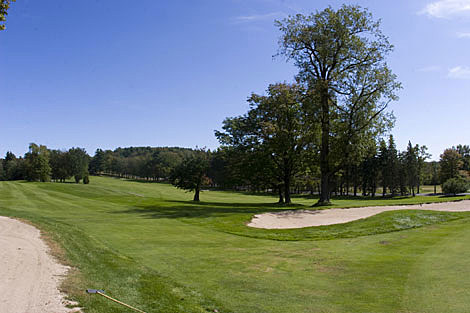 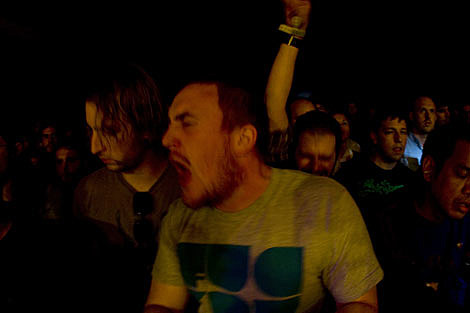 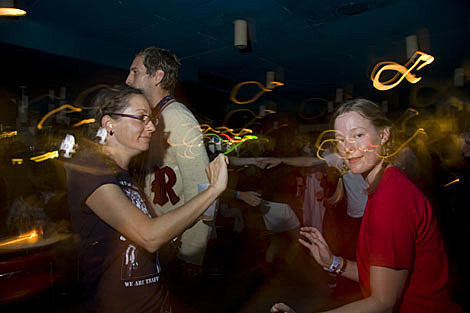 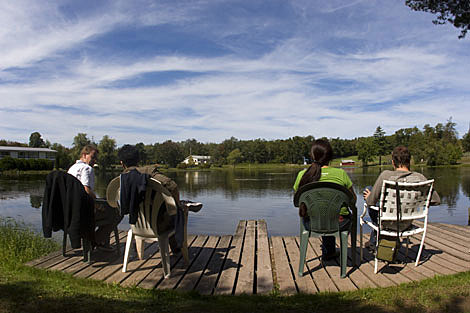 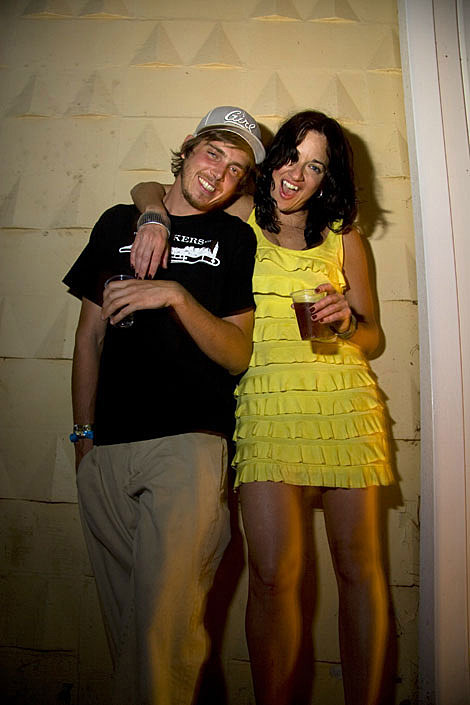 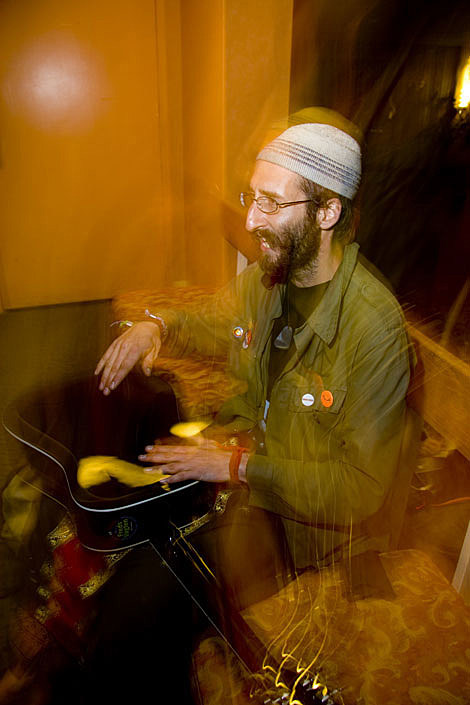 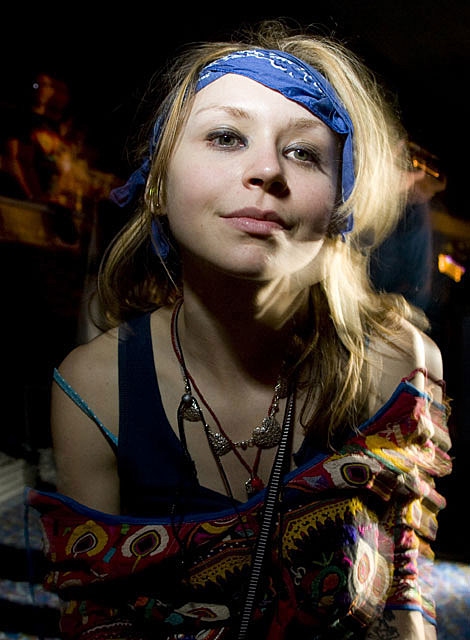 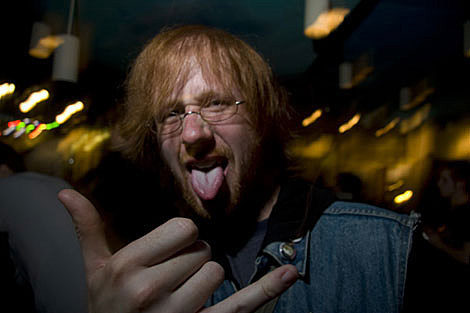 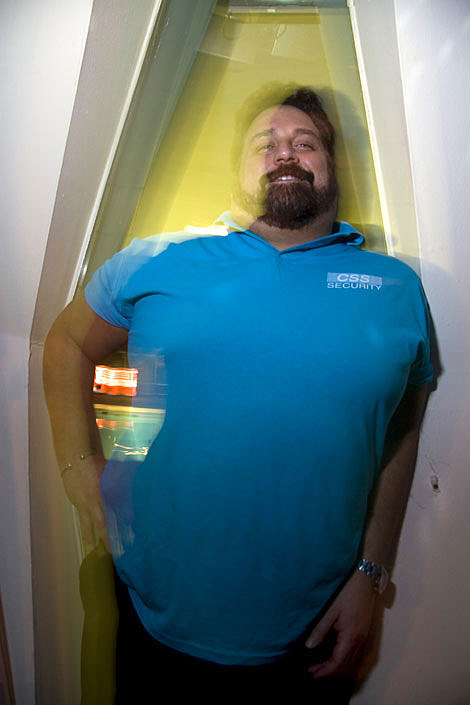 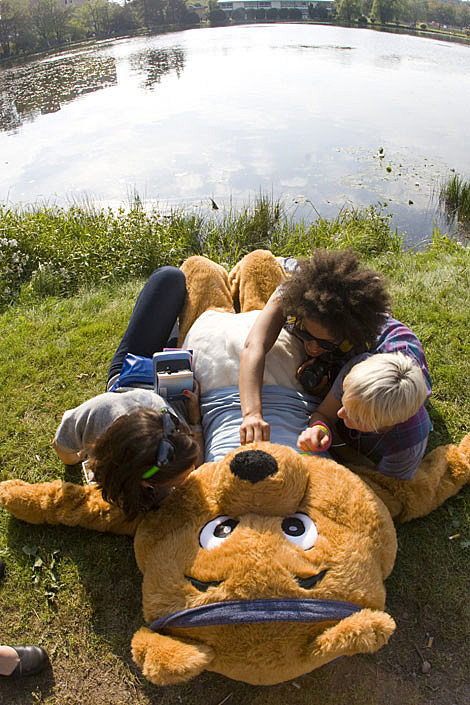 Check out all of our ATP coverage, all three days, lots of pictures, more reviews, etc: HERE.