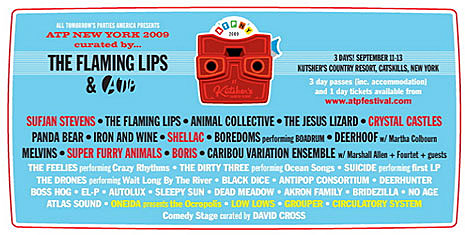 All Tomorrow's Parties (ATP) is happy to announce its return to Kutsher's Country Club in Monticello, New York for the 2nd annual ATP New York festival. The event will be held Sept 11-13, 2009. Last year's festival, co-curated by My Bloody Valentine, was a critical and cultural success with rave reviews from media and fans. This year's Fest will be co-curated by The Flaming Lips.

ATP has announced the final lineup additions to this year's festival. That includes the comedians who will be joining David Cross on Friday night, and official confirmation that it will in fact be Bob Mould who will be playing Husker Du songs (a whole LP to be exact) with No Age (who also just announced some NYC shows). Every act who plays Sunday will be playing some kind of special set...

Circulatory System, was added in the last announcement, and have since revealed an entire tour. Dead Meadow play ATP on Saturday and will perform on a boat in NYC that same week. The Feelies have a Brooklyn show scheduled. Super Furry Animals play NYC and NJ in addition to ATP. The list of related shows goes on...

Unfortunately missing from the ATP NY schedule is Nick Cave - not that he was ever supposed to be there, but in addition to being very involved with ATP in general, he was recently confirmed to be only a short car ride away just one day after the festival ends. Full 2009 lineup below...

"We are also happy to announce that Ian Svenonius will bring his VBS Soft Focus show to Kutshers for live interview sessions with Suicide, Melvins and more TBC!

The cinema for the weekend is hosted by Criterion. Expect more of the same greatness in 2009, with no-holds-barred programming both musically and otherwise. Capacity limited to just 2800 people!"

All rooms at Kutsher's are now sold out. A limited number of 4 person rooms are still available at the nearby Raleigh Resort - all other options sold out. Bus travel is now on sale, including day tripper passes and weekend passes with accommodation + bus travel. Details at atpfestival.com