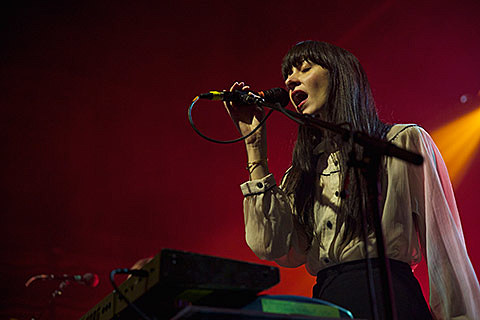 Au Revoir Simone's Move in Spectrums came out last fall and the band have been on tour around the world pretty much ever since (most recently in North America with Broken Bells). What's that like? The band fills us in:

People are always asking us what being on tour is like and how it feels to get to travel to so many different countries and meet so many new people, so we thought that a great way to share our experience is by filming some of it and turning it into a video. This video is a collaboration of all the footage the three of us shot while on tour in Tokyo, Sweden, Switzerland, and London. We wanted to capture the frenetic pace of nightlife, the eclectic scenery of each venue, and all the fun people who show up every night and make our jobs so rewarding and awesome.

That video, for "More Than," definitely shows the fun side of touring and not so much the endless continental breakfasts and van monotony. (Radiohead already did that anyway.) It makes its premiere in this post and you can watch it below.

In other news, Au Revoir Simone released a remix EP, Brightness/Contrast, back in February featuring Move in Spectrums tracks reworked by David Lynch (who's a fan), Etienne Daho and Todd Rundgren, who takes on "Boiling Point" which you can stream below. Meanwhile, Erika, Annie and Heather will head to Brazil this weekend for a string of shows, and head back to Europe in June. All dates are listed below.