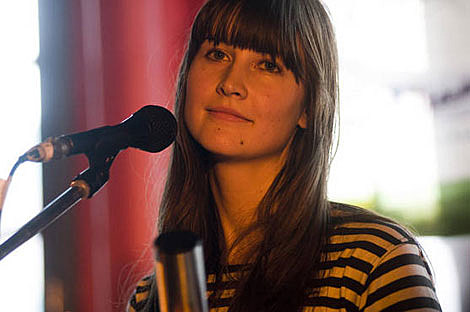 Brooklyn's Au Revoir Simone release their second full-length, Still Night, Still Light, next month and are about to head out on on a European tour (where their album comes out this month). As a warm up though, Annie, Erika and Heather are playing a "secret" show this Monday (4/13) at Union Pool. Tickets are also on sale now for two upcoming proper NYC shows: May 29 at Music Hall of Williamsburg, which will start their U.S. tour and then Bowery Ballroom on June 27 which comes at the end. Full dates are still pending.

Still Night, Still Light was produced by Thom Monahan who is a member of The Pernice Brothers and has recently twiddled knobs for Vetiver, Little Joy, and The Broken West. Au Revoir Simone played a really nice set last month as part of the Brooklynvegan day party during SXSW, and footage of them performing new song "All or Nothing" is at the bottom of this post. You can also check out early versions of three songs from the new album (which I like a lot) over at The Recess Sessions, which were filmed by Vincent Moon of La Blogothèque Take-a-Way show fame.

SXSW video and all known tour dates, below...