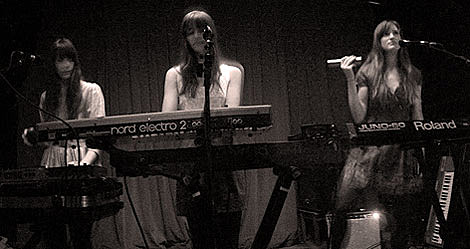 Au Revoir Simone have announced more dates for their upcoming US tour. As mentioned before, tickets are already on sale ARS's two upcoming NYC shows: Music Hall of Williamsburg on May 29 and Bowery Ballroom on June 27.

The Brooklyn trio played a fun, packed show on Monday at Union Pool as a warm-up for this extensive haul on which they're about to embark. They stuck mainly to tracks from their upcoming album Still Night, Still Light which is out May 18 on the band's own Our Secret Record Company label - a double 10" vinyl version included. The first single is "Shadows" and you can download the MP3 of it at the top of this post.

Tour dates and video of ARS performing "Shadows" at Monday's Union Pool show after the jump...