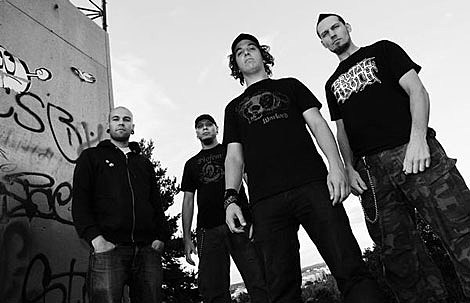 The ante has been upped. The previously mentioned Auditory Assault Festival just got a little more serious with the addition of THREE bands that made my list of favorite records in 2008... Rotten Sound, Crowpath, and Misery Index! Dig on the NEW lineup which now also includes Lethal Aggression, Entrails Massacre, Sulaco, Man Will Destroy Himself, Maruta, and Copremesis....

Rotten Sound crushed the competition in Cycles, Crowpath soiled us on One With Filth, Copremesis fondled the Muay Thai Ladyboys, and Misery Index damned the Traitors all in 2008. Lethal Agression released their first album in 20 years, Ad Nauseam, on Jan 20th via Horror Pain Gore Death. The AA Fest marks Entrails Massacre's first show in NYC in their 18+ year history. Man Will Destroy Himself was recently featured on Relapse's This Comp Kills Fascists grind compilation.

The Auditory Assault Festival is scheduled to blast off on May 16th and 17th at Europa. Tickets "are expected" to go on sale March 1st. We'll keep you informed.