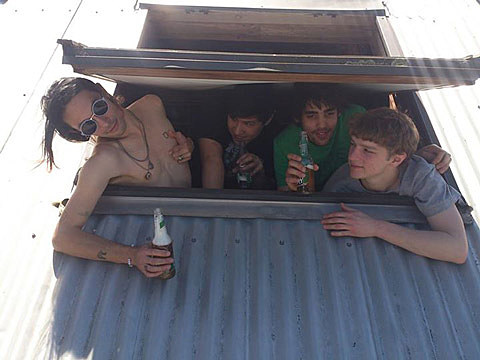 Have you had a bad day? Hate your job/town/parent/life? Feel like a tourist at home? About to freak out? Australian band Ausmuteants understand and are right there with you. Their brand of angsty new wave pushes all the right buttons. (When they sing "All day it's been a bad day" on last year's self-titled LP [which saw US release in April], you sense they're not exaggerating.) The band's new album, Order of Operation, will be out at the end of September via Goner and was once again produced by Mikey Young (Eddy Current Suppression Ring, Total Control, etc) and it doesn't seem like they've let any slack into their tightly-wound sound. Check out "Freedom of Information" and a couple tracks from the last record below.

Ausmuteants are heading to his side of the world for their first-ever North American tour, including a visit to Gonerfest and a stop in NYC at Death by Audio on October 2. All tour dates are listed, along with streams, below...