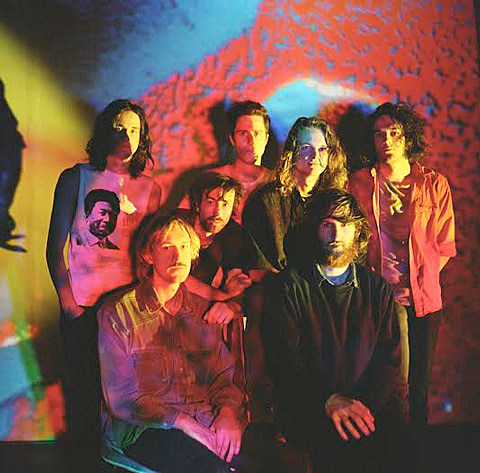 One of the most pricey RSD14 eBay turnarounds was a 12" by Australian psych band King Gizzard & The Lizard Wizard. A copy of their trippy picture-disc "Head On/Pill" single, of which only 300 were made, went for nearly $400. (The band weren't happy about it.) There are copies going for less currently, however. You can stream it for free below.

The 16-minute song comes from Float Along - Fill Your Lungs, one of two records King Gizzard & The Lizard Wizard released in 2013. The other was Eyes Like The Sky, a narrated concept album set during the American Civil War. If you like Brian Jonestown Massacre / Black Angels style garage-pysch, this seven-strong band do it well. Check out some songs and videos below.

The band are coming over to North American for Austin Psych Fest and will be touring afterwards, finishing up here in NYC with shows at Baby's All Right on May 16 & 17. The 5/16 show is with Mystery Lights, and Froth; and the 5/17 show is with Habibi, Fletcher C. Johnson, and Juniper Rising. Tickets for those shows are on sale now.

All tour dates are listed, along with videos and streams, below...