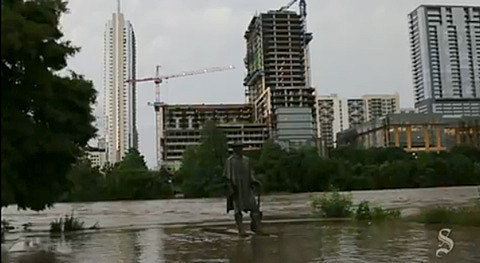 Austin, TX -- our home away from home, one of the biggest music cities in the US, home of SXSW, ACL, Fun Fun Fun Fest, countless musicians, venues, friends and many great people -- was hit hard by heavy rains that caused horrible flooding all over the city and other parts of Texas and Oklahoma. As you may have heard and seen on the news, the flooding took out trees, cars, homes and businesses. At least ten people lost their lives and more are still missing. Animals were evacuated from shelters.

Among other more important things, this played havoc with scheduled concerts. Purity Ring's show at Stubb's on Saturday (5/23) got postponed to Monday at Austin Music Hall (5/25) which, in turn, then got canceled. This Wednesday's kickoff to the free "Blues on the Green" series at Zilker Park (an Antone's 40th-anniversary celebration) is postponed till June 3 (Jimmy Vaughn and the "special guest" are still scheduled to perform). The Mohawk on Red River, as you can see in a tweet above, cancelled a show, though some places (like Scoot Inn and Shangri-La) went out of their way to make sure people knew they would stay open the same night.

The Austin Chronicle has a list of resources for those in need. Some videos of the weather chaos are below...