Austra at Bowery Ballroom on Saturday (more by Dominick Mastrangelo) 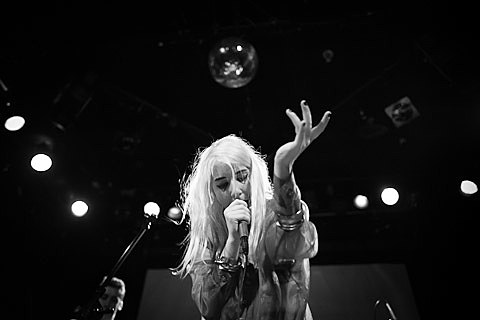 Austra, who just finished up a tour with Cold Cave at Bowery Ballroom on Saturday (8/6), will return to the venue as part of a just-announced headlining US/Canada tour this fall. All new dates are listed below.

That tour includes October 5 at Bowery Ballroom with Light Asylum. Tickets go on sale Friday (8/12) at noon with an AmEx pre-sale starting Wednesday (8/10) at noon.

And while Austra headline Bowery Ballroom, James Blake will be not too far away headlining his own show at Webster Hall as part of his upcoming tour (tickets). The next night (10/6) both Austra and James will team up to play a Brooklyn show at Music Hall of Williamsburg together! Tickets are not on sale yet, but check ticketmaster for updates. James will be the headliner of the show at Music Hall (where he played his first US show in March).

The US run also includes Austra's appearance at Moogfest and Fun Fun Fun Fest. Grimes open most of the other US dates. The Canadian shows, and a few US shows are with Austra's backup singers' other band Tasseomancy. Young Galaxy are also on a few of these dates.

The North American dates come after Austra tours Europe at the end of this month through September. That tour includes a date opening for Arcade Fire in Amsterdam a few days after both bands play Popaganda Festival in Sweden (the country James Blake plays in as part of Way Out West this Thursday night).