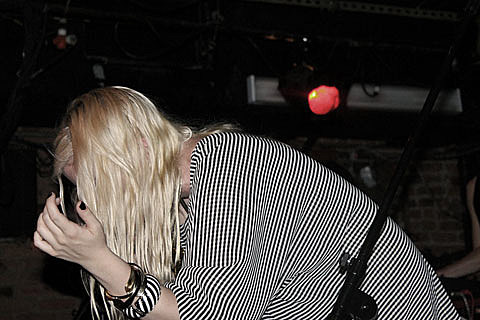 "With the singer's ethereal Kate Bush-meets-Siouxsie (by way of Nico) vocal style dominating proceedings, it's impossible to deny Feel It Break's gothic undercurrent, but there is no place for tear-streaked mascara in Stelmanis' world. These are powerful, empowering songs, and whilst their place in the lineage of electronic pop music that stretches from Kraftwerk through to the Human League and onto Depeche Mode and Nine Inch Nails is clear, there is an aggressive energy present - particularly evident in Postepski's muscular drumming - that is almost primal. In a year when female-fronted albums (PJ Harvey, EMA, Tune-Yards, Planningtorock) are looking set to dominate December's Best Of lists, Feel It Break proves Austra can stand, triumphant and proud, alongside the conquering warrior queens." [Quietus]

Feel It Break is out now via Domino, and Austra is on a short US tour in support. That tour brought Katie and crew back to NYC earlier this week...

Tickets were in short supply for the Austra show on Monday night, but instead of abandoning the Mercury Lounge for something larger as some fans suggested, the show packed out the 250-person venue. The space was cramped, and humidity hung thick in the air, but the dark, gritty impulses in Austra's music seemed to fit its surroundings.

Regrettably, I missed two of the openers, but I did catch complete sets from the two Toronto artists, Trust and Austra.

After a rather jarring and discordant instrumental intro, I can't say I had high expectations for Trust, but with the introduction of hypnotic beats and synth riffs, I began to open up. Though initially somewhat off-putting, Robert Alfons' vocals have an impressive range. Nasally one minute, he can switch to falsetto or a deeper baritone with ease, within the same song.

The sexy-electro stylings of Trust seemed a natural forerunner to Austra. Though Austra is arguably a much more dramatic performer than Alfons, the two artists share a similar aesthetic--and even a drummer: Maya Postepski.

Austra kicked things off with a couple of their strongest numbers, "Darken Her Horse" and "Lose It," the song that seems to best showcase singer Katie Stelmanis' impressive vocal range (she has operatic training) and the haunting nature of Sari and Romy Lightman's chant-like backing vocals. The combination of Stelmanis' moody vocals, Dorian Wolf's sinister bass line, and some startlingly upbeat keyboard jingles makes for quite a compelling sound.

But Austra leaves more than just a strong aural impression. Between Stelmanis' jerky but mesmerizing movements and the choreographed dance moves of the petite Lightman twins, Austra is certainly a band to see. It seemed as if Stelmanis were casting a spell on the audience with her sweeping arm movements. (Come to think of it, Austra does have a song called "Spellwork." Highly suspicious.)

After a brief set, Austra returned for a two-song encore, which included "The Noise."

Something tells me Toronto may be the next Brooklyn...

Austra's upcoming dates include a tour with Cold Cave that includes a Bowery Ballroom show, and a free outdoor show at Pier 54 even sooner. They are all listed, along with a video of Austra performing the intoxicating song "Beat and the Pulse" at Mercury Lounge, and the official video for single "Lose It", below...