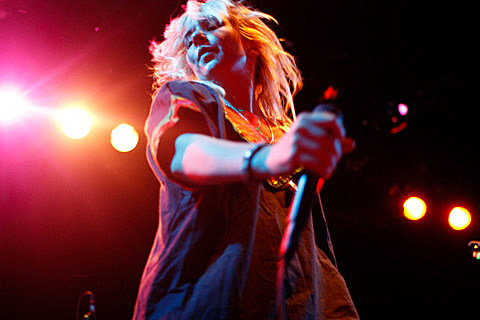 As mentioned, Austra are releasing their sophomore album, Olympia, on June 18 via Domino/Paper Bag, and will be touring in support of it over the next few months. That tour hits NYC for a show on June 20 at Music Hall of Williamsburg with Mozart's Sister (sold out) and a BrooklynVegan-presented show on September 22 at Webster Hall (tickets).

The Webster Hall show and many of their other August/September shows are with fellow Canadians DIANA, who just signed to Jagjaguwar in the US and Paper Bag in Canada. Their debut LP, Perpetual Surrender will come out on August 20 and you can watch the video for its single, "Born Again," below.

Regarding Austra's upcoming album, in a recent interview with Stereogum, singer Katie Stelmanis talked about the differences recording this one with her band, as opposed to entirely solo like Austra's debut:

Yeah, it's something that I was kind of craving. I feel like when you hear a solo record from someone you can kind of always tell that it's a solo record. Like, if literally one person did everything on the record it's like you're following their train of thought. Everything is predictable and fits into this certain box. It's one person's idea, and I was very aware of that, and I wanted to create something that's a little more dynamic. And so doing that I wanted to bring in more ideas and bring in other people and it made it more interesting for me because I was able to bounce ideas off of other people and just co-writing with people was pretty new and fun.

The album's single "Home" is being released this summer with remixes from NYC producer Ital and Detroit techno legend Kevin Saunderson.

Stream both of those remixes, along with the list of all tour dates, below...