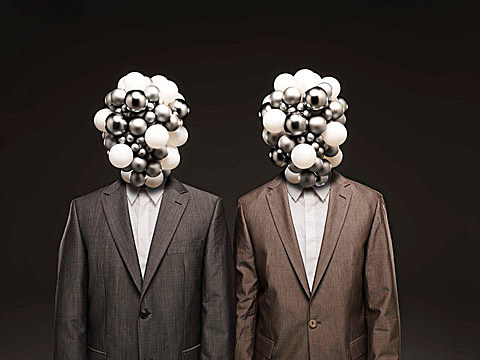 Enigmatic Aussie synthpop duo Monarchy are in the U.S. this weekend, playing Highline Ballroom on Saturday (12/10). (They play D.C. tonight). The group played Coachella and LA earlier this year but these are the group's first East Coast shows.

Sporting a slick, slinky New Romnatic sound, Monarchy got attention with early singles like "The Pheonix Alive" (which was on Kitsuné Maison 9) and rumors it was actually either actually Les Rhythms Digitales/Zoot Woman' Stuart Price or maybe Adele/Florence producer (and former Lomax frontman) Paul Epworth. (It wasn't.) After some label shuffles, Monarchy released their debut LP, Around the Sun, this August...though in America it's only available digitally.

BV photographer Diana Wong caught their Coachella set and says they're worth checking out (she's already got her tickets for Highline). The LA Times had this to say about the same show:

European synth act Monarchy likes to keep things mysterious. The band -- a three piece for much of its Coachella performance -- sported "Phantom of the Opera"-like masks to obscure their faces. A dancer outfitted in brassy gold, looking like something that belonged in a homemade credit sequence to a Bond film, performed slinky moves at center stage. Yet musically, there's little mystery here: It's '80s-influenced pop, albeit done well. What Monarchy has going for it is a sense of gracefulness, as the songs, stripped of their electronics, could easily work as blue-eyed soul.

No other dates to report (outside of DC and NYC), but tou can check out a few of Monarchy's expensive-looking videos after the jump.

--
Monarchy - You Don't Want To Dance With Me (feat. Britt Love)

Monarchy - Love Get Out of My Way