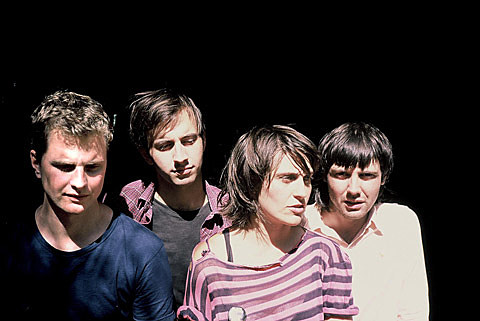 Will any Australians actually be in Australia the month of September? They all seem to be touring North America in their many indie rock bands, many of whom are playing Gonerfest. One that isn't playing that but will be over on this side of the world for a few dates are Melbourne's Dick Diver. Where some of the country's current crop of bands look to New Zealand for inspiration, Dick Diver's sonic antecedents seem to be homegrown: shadows of The Go-Betweens' sweet strum and melancholic lyrical streak can be heard on Dick Diver's album, Calendar Days, which came out last year via Chapter Music. (Bassist Al Montfort also plays in Total Control whose Mikey Young produced the latest DD album.) Calendar Days is quite good and you can stream it and their 2012 album in full below.

Dick Diver's upcoming North American dates included two in NYC: September 25 at Cake Shop with dark synth duo Final Bloom, '80s-style indie poppers Sapphire Mansions and the psychedelic The New Lines; and September 26 at Death by Audio with fellow Aussies Free Time, post-punks PC Worship (who have an LP coming on Northern Spy/Dull Tools, and open for Parquet Courts in December) and Massachusetts art punks Guerilla Toss. All dates are listed, along with album streams, below...