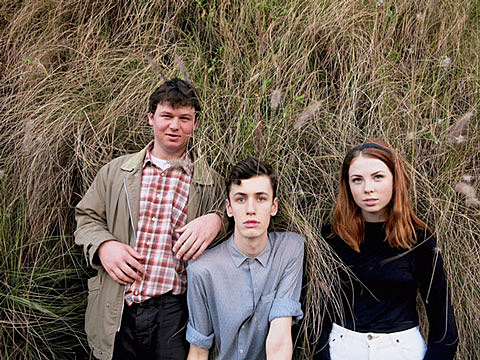 The Goon Sax formed in Brisbane, Australia in 2013, bonding over a love of wistful, strummy indie pop like The Pastels, and The Apartments. They're all still in high school, by the way, and if those seem like unlikely influences for people that age, singer Louis Forster may have heard some of it via his dad, Robert, of Go-Betweens fame.

The Goon Sax's sound is in much the same mould as those influences,, as you can hear on the endearing "Sometimes Accidentally" which makes its debut in this post. The song, written and sung by James Harrison (all three members write and sing), is the first track to be released from The Goon Sax's debut album, Up To Anything, which is coming out via Chapter Music in early 2016. If you like The Twerps and/or Dick Diver, this should be going your way. Have a listen below.

The band will be on tour in Australia later this year and those dates are listed below. Let's hope the visit the other side of the world next year.