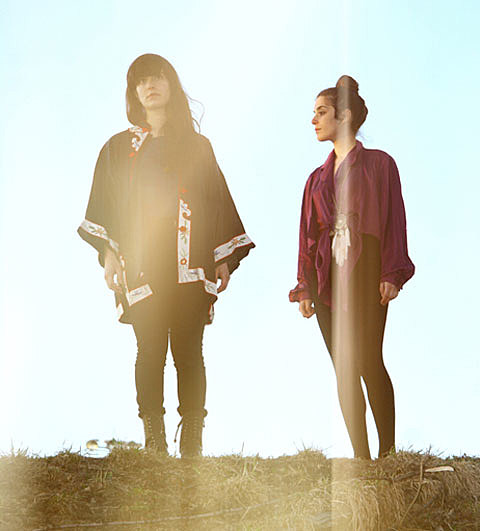 You may recognize the voices of Sari and Romy Lightman as the haunting backup singers for Toronto synth-poppers Austra. They are also the forces behind their own, equally dark but folkier group Tasseomancy. They release their first full length under Tasseomancy, Ulalume on August 30 via Out of this Spark. The album is the follow up to Tasseomancy, which they released under the name Ghost Bees. The new album was recorded with Taylor Kirk and Simon Trottier of fellow Canadian gloomy folk band Timber Timbre, who they released a split single with in 2010. Watch the video for album track "Heavy Sleep" below and grab Maya Postepski's remix of the track above.

Austra recently stopped in at "Room 205" in LA to perform a few songs. The video for "Darken Her Horse" off their incredible debut Feel It Break can be watched below. Other videos in the series will be released on July 18th and 25th. Austra play a free show tonight (7/14) with tUnE-yArDs at Pier 54 at 14th St & the West Side Highway ("Doors open at 6pm, free, no tickets required").

The above MNDR remix is from Austra's forthcoming remix EP. Videos and dates below...