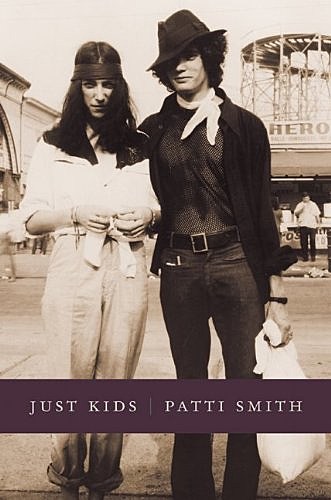 As usual you also won't have to wait that long to catch a taste of Patti. She is one of many taking part in a John Lennon Tribute at Beacon Theater on November 12th. You can also pick up a copy of her new book, Just Kids, pictured above.

"Patti Smith and Robert Mapplethorpe weren't always famous, but they always thought they would be. They found each other, adrift but determined, on the streets of New York City in the late '60s and made a pact to keep each other afloat until they found their voices--or the world was ready to hear them. Lovers first and then friends as Mapplethorpe discovered he was gay, they divided their dimes between art supplies and Coney Island hot dogs. Mapplethorpe was quicker to find his metier, with a Polaroid and then a Hasselblad, but Smith was the first to fame, transformed, to her friend's delight, from a poet into a rock star. (Mapplethorpe soon became famous too--and notorious--before his death from AIDS in 1989.) Smith's memoir of their friendship, Just Kids, is tender and artful, open-eyed but surprisingly decorous, with the oracular style familiar from her anthems like "Because the Night," "Gloria," and "Dancing Barefoot" balanced by her powers of observation and memory for everyday details like the price of automat sandwiches and the shabby, welcoming fellow bohemians of the Chelsea Hotel, among whose ranks these baby Rimbauds found their way." --Tom Nissley

Patti most recently played the Hardly Strictly Bluegrass festival in San Francisco. Some videos from that below...