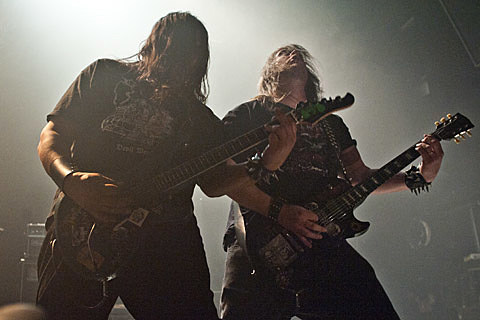 Autopsy are on their way to NYC for their first show in 19 years, and it all goes down TONIGHT at The Bell House! Featuring appearances from Funebrarum (their first NYC show in six years), Unearthly Trance, and Denmark's Undergang, the show is the lone date for Autopsy on the East Coast outside of an already-sold-out appearance at Maryland Deathfest. Tickets are still available for this BV-BBG production.... OR you can try your hand at winning one of THREE pairs I have for giveaway. Details are at the bottom of this post.

Undergang are heading across the Atlantic from Denmark to play the show, and the band have added another date happening Saturday night at Saint Vitus (5/5) with Kalopsia (members of Funebrarum) and Tribune. The show goes down at 9PM and is FREE with donation. Nothing beats a free show, so get there and give at the door if you can!

UPDATE: I was just told that this show has been cancelled.

Stream some Kalopsia and Undergang below, along with details on that contest...

For a chance at winning a pair of tickets to see Autopsy at Bell House:
Either tweet something that includes both @BVBBG AND "Autopsy" in the tweet or send an email to BVCONTESTS@HOTMAIL.COM with the subject line "total DEATH!". Include your first and last name in the email. We'll pick winners at random and contact them with more details. If you enter by email, it will not be shared with anyone else. Good luck!