Autre Ne Veut in Brooklyn in 2011 (more by Erez Avissar) 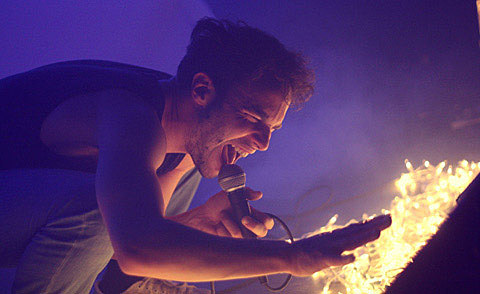 As mentioned, Majical Cloudz are wrapping up a tour in NYC TONIGHT (1/23) at Death by Audio with Kuhrye-oo and Tempers. Doors are at 8 PM and admission is $8.

After taking about a month off the road, Majical Cloudz will head out on another North American run with Autre Ne Veut, who they played with in Brooklyn this past December. That tour kicks off in late February in Philly and ends in Austin for SXSW. It hits NYC along the way on February 27 at Santos Party House. Tickets for that show are on sale now.

Autre Ne Veut will release his much anticipated new album, Anxiety, on February 26 (instead of the initial release date, February 12) via Software. The video for that album's single, "Counting," and a list of all dates are below...